T1 couldn’t have asked for a better debut. 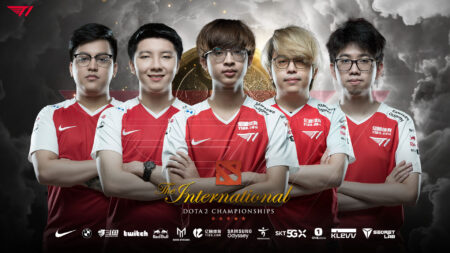 T1 became the fifth team to qualify for The International 10 when they defeated Team Aster during their debut at the WePlay AniMajor Playoffs.

The Southeast Asian squad is also the first team from their region to make it into TI10.

They outplayed and upset Team Aster after two perfect games to advance to the semifinals, and are guaranteed a top fifth/sixth-place finish at WePlay AniMajor. This means they have secured an additional 300 DPC Points.

T1 showed their best performance of the year

The first day of the WePlay AniMajor kicked off with T1 playing against the top seed team from the Chinese region.

The top Southeast Asian seed at the event surprised Team Aster with a last pick Broodmother for Carlo “Kuku” Palad who dominated his lane.

Team Aster quickly fell behind because their hero draft required them to create space and farm for their Terrorblade hard carry pick.

T1 knew this, and was active all over the map. The Southeast Asian squad looked to take fights that prevented Team Aster from getting the upper hand in the late game.

The most impressive takeaway from T1’s performance is that they were able to minimize their mistakes, even though they were always putting themselves in dangerous situations against Team Aster.

All of T1 played their roles perfectly, helping Nuengnara “23savage” Teeramahanon take control of the series.

March is a man of his word

Before the start of the 2021 DPC season, T1 signed former TNC Predator team captain Park “March” Tae-won as their new head coach. March was tasked with building a team that would make it to The International 10, and he stayed true to his word.

March decided to pick up four former GeekFam Dota 2 players, and topped off the roster with 23savage.

T1 has been the most consistent team in the Southeast Asian region, qualifying for both DPC Majors in 2021 after a successful Regional League run.