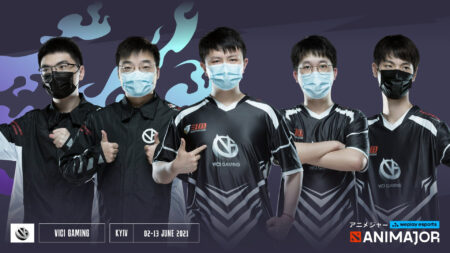 Chinese esports organization Vici Gaming survived against Virtus.pro at the WePlay AniMajor Playoffs 2-1, and did not get eliminated from the tournament.

Vici Gaming pulled together with great performances from support player Xiong “Pyw”‘ Jiahan and hard carry Yang “poyoyo” Shaohan. The win also means that Vici Gaming is now the ninth team to secure a direct invite to The International 10 after earning 800 DPC points.

The WePlay AniMajor had three other elimination matches that all went down to the wire, with Team Aster, Alliance, and NoPing e-sports eliminated from the competition.

Vici Gaming were able to rely on their stellar support players

Virtus.pro’s struggles continued at the WePlay AniMajor Playoffs. They managed to keep up with Vici Gaming during the laning phase of game one, right up until Pyw decided to take control with his exceptional support Grimstroke play.

Pyw used Phantom’s Embrace to neutralize Virtus.pro’s core heroes, preventing them from taking over team fights. He also provided damage from a distance with Stroke of Fate, which slowed down Virtus.pro’s heroes.

Pyw farmed a 20-minute Aghanim’s Scepter as a support player and used his Dark Portrait ability to destroy Virtus.pro during the final team fights of game one, and finished with a remarkable 10/1/22 KDA.

Poyoyo’s Terrorblade should not be trifled with

Virtus.pro were able to even the series 1-1 by out drafting Vici Gaming with Ursa and Ancient Apparition picks.

So in game three, the Chinese squad decided to use most of their bans to remove hard carry heroes that Virtus.pro have previously been successful with. Vici Gaming also decided to pick up a hard carry Terrorblade for poyoyo to go up against Virtus.pro’s single target core heroes.

Zeng “Ori” Jiaoyang on the Storm Spirit had a great laning phase, and used it to take early map control. This allowed poyoyo to farm and level up uncontested.

Ren “old eLeVeN” Yangwei initiated the final team fight of the match by running into Virtus.pro’s high ground and cutting down the tree that Egor “Nightfall” Grigorenko jumped onto.

This move completely wasted the Monkey King’s BKB activation which allowed poyoyo to focus down Virtus.pro’s heroes and secure a match-ending rampage.

Virtus.pro weren’t the only team that struggled during their elimination match. Almost all the top-seeded teams from the second DPC 2021 Upper Division have been eliminated, except for T1 and Quincy Crew.

Team Aster was eliminated from the WePlay AniMajor after losing to TNC Predator. This was followed by a huge upset win by Team Spirit against Alliance.

South America’s final representative, NoPing e-sports, also exited the Major after losing to Evil Geniuses in the final match of the day.