Deep truths about cosplaying with your significant other

It’s not all glitz and glamor.

Numerous merchandise booths, Japanese songs blasting over huge speakers, long lines everywhere, and a building full of anime fans — this is how a typical anime and pop culture convention goes in the Philippines, perhaps even in the whole world before the COVID-19 pandemic took a toll on everything.

This exact setting is the playground of Filipino couple Roxanne Kho and Zack “Zackt” Tolosa who have been cosplaying together. When they started dating, one of the immediate hobbies that they adopted was cosplay, and they have not stopped since then.

Roxanne Kho and Zackt have dedicated a lot of their time to cosplaying and in a span of five years have experienced a lot together. They were kind enough to share with us some relationship advice they’ve learned over the years.

When you find someone who matches the same passion and energy as you in cosplaying your favorite characters, everything just makes sense.

This was what Roxanne Kho and Zackt found in each other as cosplayers. The two had already been cosplaying individually before they met each other at an event.

“We became great friends, found a crazy whole lot of thing in common, then it grew from there,” began Zackt.

As natural fans of the Marvel comics, Roxanne Kho and Zackt’s first cosplay was Spiderman and Gwen Stacy. After cosplaying the friendly-neighborhood couple, they instantly knew that they wanted to be with each other in different fictional worlds through their favorite hobby.

“We realized we should cosplay more together — we haven’t stopped ever since,” said Zackt.

Roxanne Kho and Zackt follow two principles in picking out the characters they want to cosplay as a couple: (1) they have to genuinely like the character first individually; and (2) they have to resonate with the character in some way, whether it’s through their design, personality, backstory, etc.

“These are important to us because this helps big time with bringing the character to life. When you feel a certain love or connection to the character, it really helps you bring out the vibe or presence in your portrayal,” explained Zackt.

These principles might be the reason why their Jean x Diluc and Ningguang x Zhongli Genshin Impact cosplays have been highly-celebrated by many fans.

You know how they say that traveling together is the ultimate relationship test? Well, cosplay is also like that in a way.

Cosplaying together means committing yourselves to this passion project which you try to complete in a span of months (sometimes even weeks) with your partner. During this short period of time, you’ll gradually get to know your special someone better — the kind of anime genre they like to watch, their memorable experiences in the cosplay community, and maybe even exchange some hacks about the art of crafting props.

Through time, you and your partner might develop a formidable bond and synergy in cosplay, similar to what Roxanne Kho and Zackt have right now.

“We know each other’s preferences and needs. We get to complement each other by filling in each other’s weaknesses with each other’s strengths. We both usually like to work alone so being in a relationship in which our working styles mesh together is such a lovely thing to have,” shared Zackt to ONE Esports.

Aside from their Genshin Impact cosplays, their chemistry is undeniable and it shows in their photos of Code Geass’ CC and Lelouch, Demon Slayer’s Iguro and Kanroji, and Rurouni Kenshin’s Kenshin and Kaoru. Forcing a couple cosplay is not in really their book — Roxanne Kho and Zackt believe a cosplay shines through if the cosplayer has pure love for the character.

“I think being forced to cosplay a certain character you don’t feel for really compromises the quality of the cosplay,” explained Zackt. “Cosplaying is something we love doing whether as a couple or individually, so we really give each other the freedom to choose whoever as long as we’re enjoying.”

“We’re lucky to have similar preferences and types, like the characters I usually have a crush on is usually Zackt’s cosplay pick, and vice versa,” added Roxanne Kho.

Despite having almost the same interests when it comes to video games and pop culture, there were times when they would end up with different cosplay plans (cosplans for short).

“I think we’re both equally supportive when it comes to whoever characters we choose to cosplay. We do, however, play, significant roles in each other’s creative process,” revealed Roxanne Kho.

The two respect each other’s individuality so much that there are no issues between them when it comes to being paired up with other cosplayers. The only problem they’re experiencing as a couple is not having enough time to do stuff that regular couples do.

“We BARELY get to go out on what you’d call ‘romantic dates,” said Zackt. “We’d rather spend more time on supply runs and creating new costumes or content.”

It’s always give-and-take, even in cosplay

At the end of the day, after the convention floor has closed its doors and the cameras have stopped clicking, Roxanne Kho and Zackt know that they’ve got each other’s backs.

When they’re not cosplaying together, they support each other in every possible way. It’s always the little things that matter, as the relationship experts would say.

“Whenever Roxanne has her individual event guestings or photoshoots, I go with her to serve as her assistant. We’re both very health conscious so we have to be with each other to attend to our respective health needs,” said Zackt. “Whenever she needs some accessories or props, I craft them for her if our schedules permit. When she finishes her shoots, I’m in charge of post-processing her photos and making sure to bring the best out of their output.”

“I’m the more workaholic one between us two, and the one to get addicted to a series easily. I’m just really, really happy that Zackt always supports whatever craziness, even how random it is, I make out with my cosplans,” Roxanne Kho added.

Here’s Roxanne Kho in her Keqing cosplay, giving back to Zackt by serving as his photographer in one of their individual shoots.

The two always practice a give-and-take relationship even during the process of building a cosplay. Roxanne Kho says it makes her feel proud to see the achievement of her partner knowing that she made a contribution to make the cosplay a reality.

“Just the thought that I am somehow a part of the whole picture makes me feel victorious too! My win is his win,” exclaimed Roxanne Kho.

In any relationship, be it cosplay or not, the best thing is having someone who will support you in doing what you love and who will understand your fears and insecurities. This was what Roxanne Kho and Zackt found in each other.

The two have already ticked cosplaying Final Fantasy VII’s Cloud Strife and Tifa Lockhart off their dream couple cosplay bucket list, and have agreed to cosplay more Final Fantasy couples like Yuna and Tidus and Rinoa and Squall. 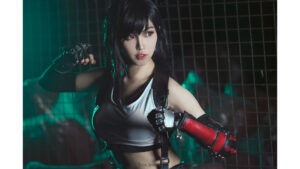