The dark side of cosplaying that no one ever talks about

Why I walked away from my favorite hobby. 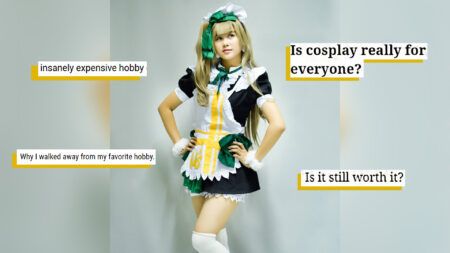 Don’t get me wrong — it was a really fun hobby. Imagine being called your favorite character’s name at a convention, dressing up and acting as a fictional person, and meeting new friends through the fandom — it was a dream come true!

I’ve enjoyed watching cosplay grow from a niche hobby into a widely-accepted pastime, embraced by anime and pop culture fans, streamers, content creators, and gamers everywhere, but as it’s grown bigger and bigger, aspects of the hobby have appeared that I just don’t like anymore.

I rarely see anyone talk about this side of cosplay, but someone needs to address this.

I started cosplaying back in 2011, just a few months after my brother brought me to see my first-ever anime convention. The venue floor was filled with Japanese-themed food booths, merchandise stalls, and a small stage for intermission numbers and contests. The best part of the convention was seeing all the cosplayers with their colorful costumes, striking a pose every now and then. This was when I first thought I wanted to be a cosplayer now and forever.

Unlike the cosplayers from the convention, my first cosplay wasn’t really a flashy one. It’s something very simple from my wardrobe — red jogging pants and a plain white t-shirt in an attempt to portray Nakahara Sunako from The Wallflower anime. Of course, back then I was just a dirt-poor high school student with no other source of money except my parents.

With my second cosplay, I aimed higher with Akiyama Mio from K-ON!. I joined an academic cosplay competition to earn money to buy materials and commission for a proper costume. This was when I first started learning the ropes of cosplaying here in the Philippines — renting a full-set costume, crafting props, commissioning tailors– it was a whole new world, and I was not prepared for it financially.

Fast forward to my senior days when I was about to graduate and obtain my university degree. These were my most active years as a cosplayer, especially since I had both the time and money to spend. Entering the “real world” as they would say, I started having second thoughts about this insanely expensive hobby of mine.

My co-writer and colleague, Mika, had the same thoughts two years ago, trying to weigh the growing costs of this hobby versus her priorities as an independent, young adult.

“Cosplay made me believe dreams were within reach, and today, those dreams are within my grasp. That’s where my energy has been going, and unfortunately, there’s little left for cosplay. My love for the hobby hasn’t changed BUT you can’t say I haven’t. Priorities change, you change, life changes. That’s just the way it goes and that’s not a bad thing at all,” Mika admitted in her post.

I suddenly became aware of how expensive cosplaying can become especially if you are not resourceful enough or just don’t have the time to scout and craft props and costumes. I kept telling myself that cosplaying for me is just a hobby, an extension of my love for a particular character or series, and it’s something I really enjoy doing during my free time. However, it seems like the Kristine from ten years ago has long been gone, together with her ideals about being a cosplayer forever.

Influencers are taking over

When cosplaying was just starting to become popular, it already has a bad image since it is associated with the otaku culture in Japan, a subject looked down on by the majority who are not into anime. During the early 2010s, I saw a lot of my friends get ridiculed and bullied during conventions especially when roaming outside the event halls where normal mall-goers hang out.

Today, cosplay is more welcomed by the masses, but it still leaves a bad taste in one’s mouth because of yet another issue.

Why do people cosplay? For some, it’s to show the whole world their admiration for a certain character, for others, it’s to meet new people under the same fandom, but for certain people, it’s a start to their dream of becoming a popular model and eventually get hired to become an influencer.

Because some cosplayers have this goal in mind of hitting the jackpot and rising to popularity, cosplaying nowadays has started to feel more like the latest cycle of Tyra Banks’ America’s Next Top Model where you have to have the best photos so you can build your “cosplay” portfolio. At this point, cosplaying has pretty much just become a medium to gain everyone’s attention, NOT to the character but to the cosplayer. And what’s the fastest way to get those likes and follows? Lewd photos.

Suddenly, cosplaying isn’t something geeky. It’s a path to stardom. Unfortunately, some will do whatever it takes to get on the model train, even if it means leaving a negative image of the cosplay community.

Cosplay is no longer for everyone

Of course, with the rise of cosplayer-models are actual fashion models and even booth babes infiltrating the scene. Don’t get me wrong — I am not gatekeeping. As the general consensus goes, anyone can cosplay.

However, seeing countless models take over a character they barely even know opened my eyes to the fact that the cosplay world will be especially good to you if you are good-looking. Yes, anyone can cosplay, but it’s especially a huge plus if you have the perfect body proportions and a pretty face to pull off the character.

This makes me think of the existing issues we have in the cosplay community, where cosplayers who are considered to be “too fat” or “too black” are instantly taunted and body-shamed by non-cosplayers and, sometimes, even cosplayers themselves.

If you search for the hashtag #28daysofblackcosplay on social media right now, you’ll see a lot of stories and sentiments by black (and even plus-sized) cosplayers who don’t get featured and celebrated as much as non-black cosplayers. The cosplay community dedicates the whole month of February to break the stigma and stereotypes and put an end to body or skin-shaming.

We keep saying it over and over again, but is it really still true that anyone can cosplay?

The future of cosplay could be fraught with legal issues

Just last month, the Japanese government delivered news that might change the cosplay industry as we know it, especially in the Land of the Rising Sun.

The government is planning to impose a major copyright law on people who earn money from cosplaying. Basically, if you are a professional Japanese cosplayer who has been selling prints or has been getting hired for events, you might start paying the government soon to give you permission to use these characters. The government is set to review these copyright rules come March. Creators and cosplayers including Japan’s number-one cosplayer Enako have been involved in the framework process and have given their inputs on this issue.

Because of these future copyright problems, the freedom of cosplaying with no strings attached hangs in the balance. As a member of the cosplay community, I can’t imagine a world where you have to go through all this paperwork and pay all these fees and follow all these rules about a hobby that’s supposed to let its participants be free and creative. As cosplayer Carla “FoxRots” Vergara has said, cosplay is where you can “let your freak flag fly.”

At the same time, this new set of rules might just draw the line and solve the long-time debate of whether cosplaying is a form of copyright infringement especially with the idea of dressing up exactly like certain characters without even asking for the creator or the publisher’s permission.