Become the king of the desert. 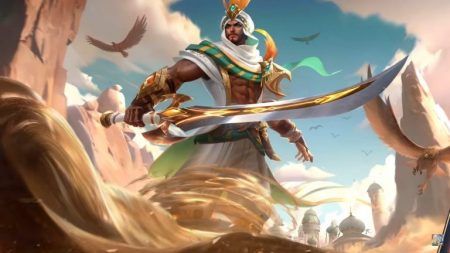 His most unique trait as a fighter is that his skills deal AoE damage. Combined with his passive and repositioning abilities with Desert Tornado, Khaleed can be very sticky.

Khaleed summons a sandstorm and rushes toward a designated place, gaining Control Immunity during the period, dealing 150 / 225 / 300 (+80% Extra Physical Attack) Physical Damage to enemies on the path and constantly knocks them back slightly.

Upon arriving at the destination, Khaleed shakes the ground, dealing 500 / 650 / 800 (+160% Total Physical Attack) Physical Damage to enemies within the area and stunning them for one second.

Khaleed’s enhanced Basic Attack Basic Attack will also leave a sand trail for two seconds, increasing his Movement Speed by 25% on the sand pool while his enemies are slowed by 25% when they step on it.

Upon hitting an enemy, Khaleed can leap one time in the movement direction and cast this skill again. He can cast a maximum of 3 times. Each time he casts this skill, the damage increases by 20%.

This skill deals 50% more damage to minions and creeps.

While channeling, quicksand appears under his feet, slowing enemies who walk over it by 60%.

In the last tier, Festival of Blood gels super well with his spell-based kit as it grants him Spell Vamp.

He can be played using the Assassin Emblem too, but it means having no Spell Vamp and less synergy with his core items.

Equipment wise, Magic Shoes with the extra CD reduction is beneficial to Khaleed’s playstyle, which relies heavily on chaining Desert Tornado. If you need to adapt a more defensive stance in-game, Warrior Boots will be helpful.

Bloodlust Axe is essential on Khaleed, as he benefits from all three stats: Physical Attack, CD reduction and Spell Vamp, which is amplified through Festival of Blood.

We would also recommend Queen’s Wings as he’s too squishy to run a full assassin/damage build. Immortality can also be added on for extra defenses.

Everything else in between depends on the player and circumstances in-game. Blade of Heptaseas, Raptor Machete and Blade of Despair are all valid options.