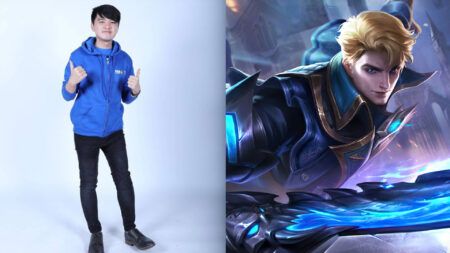 Sky Wee is a full-time streamer and professional MLBB player. He has more than one million followers on Facebook, with a large Southeast Asian audience.

Known by the title “King of Fighters”, he excels on an assortment of fighters at a high level, even when they are not in the meta. Recently, he rose to the top two rankings globally on Alucard.

Sky acknowledges that he rarely sees Alucard played as a hypercarry jungler in high Mythic Glory ranked games, for he is not easy to excel with at higher ranks. However, he believes that if you master his playstyle, you too will be able to rank up no matter what.

Here are five tips from the man himself to up your Alucard game:

1. Use Assassin Emblem and run Retribution

I will always choose Assassin Emblem for this hero. In the first row, I take Agility for the movement speed, then Invasion for Physical Penetration, and lastly Killing Spree for bonus health and movement speed. In my opinion, Emblem wise, you do not need to change it up, for it will suit all situations.

Next, you need to choose the right Battle Spell. As he is a jungler, Retribution is the best. If you ever want to play him in the side lane as an offlaner, take Execute to burst opponents down.

These are the six items I usually get on Alucard: Raptor Machete, Warrior Boots, Blade of Despair, Endless Battle, Queen’s Wings, and Blade of the Heptaseas.

Raptor Machete is your core for farming the jungle, and allows you to stack damage. Warrior Boots grant you extra movement speed and physical defenses. I like Blade of Despair as it does the highest burst damage in this build, since attacking enemy units below 50% HP increases your hero’s Physical Attack against them.

I will also buy Endless Battle for lifesteal and True Damage, while Blade of the Heptaseas grants Alucard some extra health, Physical Penetration, as well as that juicy extra 60% Physical Attack damage thanks to its passive.

Lastly, for defense, you can get Queen’s Wings to reduce incoming damage by 40% when your own health is below 40%. This works really well with Alucard because it increases physical lifesteal by 40% too.

If you find yourself in a game where there’s a fed hero on the enemy team, I suggest buying Endless Battle as your first core item for the sustain.

In the late game, I may also choose to sell Warrior Boots and replace it with Windtalker. If I have more than 6,000 gold extra, I will sell Windtalker and Blade of the Heptaseas to replace them with two additional Blade of Despairs.

A neat trick I like to do is that once Queen’s Wings goes on cooldown, I will sell it and buy Immortality so that there’s no downtime.

3. Max your second skill, Whirling Smash, and master these combos

Always max out your second skill, Whirling Smash, for lower cooldowns. This allows you to close the gap more often for engage, or disengage.

Use your first skill, Groundsplitter, to jump in, chaining it with your ultimate, Fission Wave for burst damage. Then proc a basic attack, followed by Whirling Smash for AoE damage.

After you’ve mastered the basic combo, any advanced combo will be more freestyle, where you adapt to the situation accordingly. Generally, you should use your second skill and chain it with a basic attack onto your opponent.

To dodge skillshots, use your first skill, then weave in a basic attack when you reengage. Finally, chain your combo with your ultimate to deal the most burst damage.

4. Focus on objectives early on, and lock onto core heroes in team fights

In the early game, you should focus on securing Turtle and roaming to help your teammates. When mid game comes, concentrate on objectives like towers after ganking, and keep farming up to extend your gold lead. You can even invade the opponent’s jungle if you manage to kill their core heroes.

In the late game, when more team fights happen, zoom in solely on the enemy’s core and mage heroes. Alucard should always focus down the marksman and core.

5. Combo with aggressive heroes, but watch out for Esmeralda

Alucard generally gels well with all heroes, but I have to say that the best are heroes who can setup for him aggressively. For example, after Yu Zhong initiates, Alucard can dive in with his burst combo.

However, do watch out for Esmeralda on the enemy team. Alucard cannot kill her if she continually stacks her shield. In such situations, I will focus on ganking her in early game, and try to end the game fast. However, I think it’s best to ban her during the draft phase.

Usually during draft phase, I’ll go with two fighters in the side lane without the need for a marksman. Since I consider Alucard as a fighter, I enjoy playing this 3-fighter lineup the most. When climbing rank, always remember to be confident and use an aggressive playstyle.

In order not to be kited or eaten by opponents, focus on camping them. Once an enemy walks into your bush, that’s the opportunity to burst down this hero. Of course, if it’s a tank, it will be harder to do so unless you go in together with your teammates.

Even though Alucard is not a meta hero, I believe he is never out of the meta. Happy hypercarrying!

READ MORE: Sky Wee’s 5 pro tips to cut down your opponents with Gusion