There are internal issues that need to be resolved. 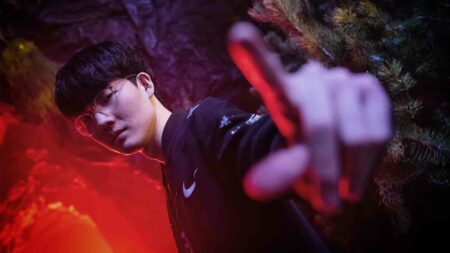 Holding an 8-5 record, they started off the season strong with a five-match win streak before Weibo Gaming handed them their first loss in Week 5.

EDG recovered by taking wins against FunPlus Phoenix and Invictus Gaming, but have since lost to Victory Five, Top Esports, and Royal Never Give Up, three of the strongest teams in the league, and fell 2-1 to Anyone’s Legend.

ONE Esports translated eSports Focus’ interview with Viper in Week 7 where he revealed what the team is striving to improve on, and responded to fan comments about his character.

When asked about which aspect he thinks the team needs to adjust and improve on, Viper highlighted that communication was the most important.

“Before when we faced off against TES, our communication was very messy, so that’s why I hope that these problems will be resolved,” he said.

In their recent losses, Edward Gaming managed to go toe to toe with their opponents, but were seen struggling from mid to late game, especially around objectives.

Recently, Edward Gaming fans also made comments about his personality after watching his livestream, which made them believe that he can be quite dramatic at times.

“Actually I’m not as fun as I seem to appear on stream,” the bot laner reflected. “It’s because I’m a pro player, and it gets a bit boring to play games everyday, so I release stress by joking around. When it comes to my true character I don’t talk much. I’m more taciturn.”

Edward Gaming will take on Bilibili Gaming on March 12. Catch the LPL Spring Split 2022 livestream on its official Twitch and YouTube channels.