They are champions for a reason. 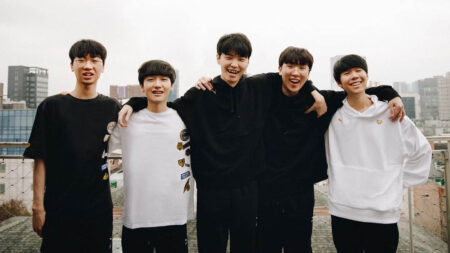 With Worlds 2022 right around the corner, LCK teams are traveling to North America to compete against some of the best League of Legends teams in the world.

The four LCK teams held a pre-departure press conference on September 23 at LoL Park which covered a wide range of topics. They spoke about expectations for the tournament, which teams and players are on their radar, and their thoughts on the next patch.

In particular, Gen.G’s head coach Go “Score” Dong-bin, elaborated on his team’s recent success. He exuded an unusual sense of calm and assurance. His voice was clear and loud, and his statements were direct.

Score, a former pro player and caster, is leading Gen.G to the championship

Being in the spotlight is nothing new for Score. He has been a professional League of Legends player since 2013 and eventually retired at the end of 2018. He dabbled briefly as a caster in 2019 before returning to the LCK as a coach this year.

Being on the Worlds stage as a head coach is a dream come true for him, and he is overjoyed to be given this opportunity. He hopes to return as a winner, he said in the press conference.

“Because we are LCK’s number one seed, I personally have a lot of expectations,” he said. “I will do my best to return with the best possible results.” He stated that this expectation is understandable since the team had won the 2022 LCK Summer championship, which wasn’t easy.

What’s the secret? According to Score, it’s because they’ve built a team around veterans with multiple Worlds attendance and titles.

Experience is Gen.G’s most powerful weapon in winning Worlds

“At this time, I cannot confidently identify any weaknesses within the team,” said Score.

He believes he has assembled a veteran roster with multitude of strengths and raw mechanical talent, and with a few tweaks, they have built a solid team capable of winning the World Championship. This seasoned team also frequently shares a wealth of knowledge gained from previous experiences.

They are bolstered by a group of assistant coaches who have a knack for identifying issues. Both Score, and assistant coach Won “Mafa” Sang-yeon have won a world championship on top of multiple top three finishes in the LCK on KT Rolster.

As such, they have a habit of holding open discussions about strategies. Because Gen.G’s coaches are former pro players, they are also able to provide feedback in a way that is simple for players to understand, as well as being brief and to the point.

Their efforts have paid off, as the organization finally won an LCK split, a first since its inception in 2018.

The Korean online LoL esports community as well as LCK players widely recognize Gen.G’s strength. DWG KIA’s star midlaner Heo “Showmaker” Su previously commented that Gen.G has been doing well because every single player is so competent in their role that their farm, experience, and reaching core items are largely in sync.

When asked how he felt about that remark, Score replied that only a strong team could pull it off.

“Gold is obtained by killing champions, destroying towers, and completing objectives. If all of our team’s champions grow at the same rate during a match, it means that all of our team members are doing their jobs, making us one of the strongest teams in the world and it is our biggest advantage.”

However, it wasn’t all confidence at the press conference. The coach also mentioned that they will take Worlds 2022 one step at a time.

“Of course, winning Worlds is our primary goal, and we have high expectations. However, the most important thing is that we must get off to a good start, and we must perform well beginning with the group stages, so that is what we are concentrating on right now,” he said.

Worlds 2022 kicks off on September 29 at the Arena Esports Stadium at Artz Pedregal in Mexico City, Mexico.