Doublelift comes out of retirement, reunites with Bjergsen on 100 Thieves They will be led by former pro player turned head coach, Christophe “Kaas” van Oudheusden, who was previously an assistant and strategic coach at MAD Lions. Former XL mid laner Erlend “Nukeduck” Våtevik Holm has also joined the organization, stepping into his new role as coach.

Doublelift and Bjergsen are back! 100 Thieves will field a team of rookies and veterans for LCS 2023 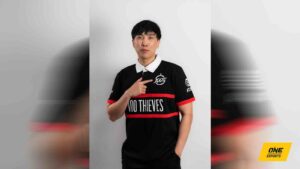 Doublelift first made a name for himself on CLG ten years ago at the start of his League of Legends pro career. Together with support Zaqueri “aphromoo” Black, they became one of the best bot lane duos in the LCS, turning CLG into a top three team.

Right after Worlds 2015, the star AD carry shocked fans by signing with rival team, TSM, which Bjergsen had been with since 2013 when he moved from Europe to North America.

Together, they brought TSM to even greater heights at the peak of their careers. They qualified for Worlds 2016 in their first year together, and again in the following year in 2017. Both runs ended after they were eliminated from the group stage.

Doublelift then moved to Team Liquid from 2018 to 2020, but reunited with Bjergsen again in TSM for the Summer Split. They once again qualified for Worlds 2020 — but failed to win a single game during the group stage. Both of them retired after, with Bjergsen transitioning to a head coach position while DL became a fulltime content creator with TSM.

Tenacity and Busio were promoted from 100T’s academy roster. Closer, whose contract expires in November 2023, has been a staple on the 100T roster since 2021.

Led by former head coach Bok “Reapered” Han-gyu, the organization won the LCS Summer 2021 championship, and finished second at LCS Spring and Summer 2022. At Worlds 2022, they went 1-5 during the group stage.