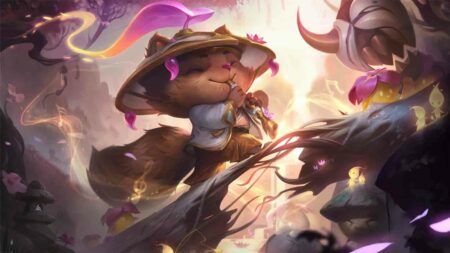 League of Legends’ iconic champion Teemo can just be annoying at times with his invisible shroom traps and blinding darts.

A really good Teemo player can incapacitate you and slow you down with his abilities if you’re not careful.

But fret not, because we listed down three dependable champions who can take him all the way back to his home in Bandle City.

Pantheon is the perfect champion to combat Teemo. He deals a lot of damage mainly because of his passive Mortal Will, which empowers his basic attack and abilities.

Pantheon’s Shield Vault can also stun the little devil so that you can keep him at a safe distance, while Aegis Assault, which braces his shield in the target direction, protects you from magic damage.

You should also be using Comet Spear to poke him from a distance before committing to the all-in.

Since Teemo is usually played in the top lane, Garen is an ideal pick to use against him.

Utilize Garen’s large health to soak up the damage from Noxious Traps during the early game. Remember to make the most out of your regeneration passive, Perseverance, when you are out of combat.

During the mid game, build defensively to keep up your sustain during team fights. Items like Death’s Dance heals you for 15% of all damage dealt to an enemy.

If Teemo builds AP, Force of Nature will be especially useful. At full stacks, it’ll boost Garen for 10% bonus movement speed and reduce all incoming magic damage by 25%, synergizing with his playstyle.

Anyone who wants to poison you deserves to bleed.

Darius is a strong solo queue fighter that can tank and sustain himself against Teemo’s damage. Pull him using Apprehend. When it successfully lands, use his first ability, Decimate, to deal more damage when he runs away from you.

His core item, Stridebreaker, applies a slow, which gives you a better chance of opening with Apprehend. Follow up with Death’s Dance and Force of Nature.

Since each player can only place one Control Ward, it’s important to maximize the power of its detection by putting it in an ideal spot.

Where does the enemy Teemo usually hang out? Can your ward placement help the team during a clash? Will this be spotted and de-warded immediately by the enemy team?

Try asking yourself these questions before planting that ward.

Stay with your minions

If you’re having a hard time avoiding shrooms, initiate a battle near your territories. You can either do some tower hugging from time to time or let your minions lead the way so they soak up all the incoming damage from any undetected traps within the lane.