“Wear it like armor, and it can never be used to hurt you.” 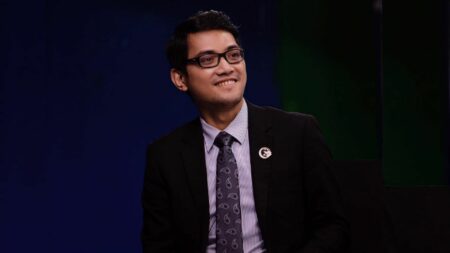 If you’re an esports fan in Southeast Asia, chances are you’d recognize shoutcaster and analyst Caisam “Wolf” Nopueto on live broadcasts during big tournaments like MPL and the M2 World Championship, or leagues like Mobile Legends: Bang Bang, Dota 2, and PUBG Mobile.

However, little known to viewers, Wolf has to deal with a deadly disease daily.

Before becoming a shoutcaster: How Wolf learned to live with lupus

Wolf was first diagnosed with lupus during his college years, long before he started shoutcasting.

Lupus is a rare autoimmune disease that causes the immune system to turn on itself and attack perfectly healthy tissue. It has puzzled doctors for many years, and unfortunately, there’s no cure yet.

As the incidents with lupus worsened, Wolf eventually had to stop studying, as the disease prevented him from carrying out simple tasks.

“There was one time I couldn’t even submit my homework for a class,” Wolf shared with ONE Esports. “I held my hand up and showed my professor in person and said, ‘I’m sorry sir, I really can’t write. I can’t move it. Can I ask for an extension?’ It was really bad.”

Wolf has experienced many of lupus’ more severe symptoms, and had to make several trips to the ER because of it. Difficulty in breathing, skin complications, loss of memory, and paralyzing muscle spasms are some of the symptoms he experiences.

Wolf making a start in esports and shoutcasting

Since he had trouble moving his legs and lower body, Wolf looked for other opportunities after stopping school.

He turned to gaming to help him cope with lupus, for he was stuck at home, and started playing Dota 2. Around the same time, the 2014 documentary “Free to Play” was released.

“When I saw ‘Free To Play’ and watched The International, I was so amazed by the analysis,” said Wolf. “They could predict what was going to happen, or which hero was going to come out! That’s when I heard the word ‘esports’. I knew that if I got the chance to get into esports, I’d go for it.”

Wolf started practicing shoutcasting casually with friends, muting videos of tournaments and trying to commentate over it. Driven to break into the gaming scene, his writing and editorial background first led him to work with Mineski and GG Network as a content writer.

When tournament broadcasts started hitting the market, a demand for shoutcasters and commentators started to grow, and Wolf found himself at the right place and the right time.

As one of the first analysts and shoutcasters for Dota 2 in the Philippines, Wolf made his way into other games like PUBG Mobile and Mobile Legends: Bang Bang.

He’s been part of events like the Manila Major, The Nationals, the Esports and Gaming Summit, and many other local tournaments. Since 2017, he’s been one of the official shoutcasters and analysts of MPL PH. One of his biggest events to date was the recent M2 World Championship in Singapore.

The hectic lifestyle of esports hasn’t always been kind to Wolf. He admits there were times he had to pass on shoutcasting events due to lupus-related incidents.

One of his worst lupus attacks happened during The International 2019, where he was a shoutcaster for the local broadcast team. A bad muscle spasm caused him to miss the rest of the event, and fellow MPL shoutcaster Dan “Leo” Cubangay had to carry him to the hospital.

“I couldn’t get up anymore, I literally couldn’t stand,” he recalled. “I called Dan since he lived near me and he carried me to the hospital. I had to recover and I missed the rest of the event.”

With such an unusual condition, Wolf also wants to encourage more awareness about lupus and other autoimmune diseases. Thanks to his growing reach as an esports shoutcaster and analyst, Wolf has gotten messages from people who suffer from similar conditions.

He’s happy to be able to inspire others, especially those who think they can’t live a normal life or live out their dreams. Wolf quoted Tyrion Lannister from “Game of Thrones”, and said it’s exactly why he “wears his disease like armor, so it can never be used against me.”

Others often tell him to rest, but he says his love for analysis and shoutcasting has actually helped him manage lupus alongside a fast-paced esports career.

He’s learned to plan things in advance with a contingency plan. Transparency with his employers and co-workers has been standard for him, as well as learning what his personal limits are.

Wolf doesn’t feel like giving up esports or shoutcasting anytime soon, especially since he’s happiest when he’s working in this industry.

“There’s always a sense of urgency with what I want to do because each day might be my last. It’s why I want to keep doing what I do. I choose what makes me happy, everyday.”

Check out more from our interview with Wolf on our YouTube channel!