Who is Power in Chainsaw Man? Story, personality, and first appearance

Get to know the fiendish hunter. To get you acquainted with the big names in the series, here’s a quick introduction to Power in Chainsaw Man, including details on her background story, personality, and first appearance in the manga.

Warning: Spoilers if you haven’t read the first 13 chapters of the Chainsaw Man manga.

Who is Power in Chainsaw Man?

Power is a supporting character of Chainsaw Man, a horror-comedy manga series written and illustrated by Tatsuki Fujimoto. The series is set in a world where devils manifest from human fears.

Power is introduced as the third member of Makima‘s special devil hunter squad alongside Aki Hayakawa and Denji. Makima explains that she’s a fiend, a human corpse that’s been taken over by a devil. This gives her the ability to restore health by consuming blood.

On her first patrol with Denji, Power smells the scent of the Sea Cucumber Devil and abruptly goes in for the kill. The squad member jumps off a building and slams the devil with a hammer made of her own blood.

Despite getting the kill, she is chastised by Makima since another devil hunter was already on the case. Power lies and puts the blame on Denji, and the two argue until Makima quiets them down.

The duo goes back on patrol and casually talks about their lives. Power mentions that she likes cats and hates humans because of her devil instincts. She adds that she hates devils because one of them stole her cat, Meowy. Denji tries to sympathize by mentioning Pochita, but she snubs him and says that Pochita is dead.

Power hatches a plan to save Meowy with the help of her teammate. Since the devil can use Meowy against her, she asks Denji to eliminate the devil. Upon arriving at the house where the devil is, Power accidentally reveals that she’s been lying, knocks him out, and offers his body to the Bat Devil in exchange for Meowy.

Since it was expecting a human, the Bat Devil complains about Denji’s blood and punishes Power by swallowing her and Meowy whole. Inside the devil, Power contemplates her love for Meowy and now realizes that it’s a lot like how Denji feels for Pochita.

Denji soon eliminates the Bat Devil and saves Power and Meowy, but the fiend wonders why he went so far to save someone who lied to him. Denji simply explains that he wants to feel her chest. Power thinks his motives are foolish, but allows it since she got Meowy back.

The Leech Devil then ambushes them out of nowhere. Lacking the blood to fully transform, Denji does his best to fight off the devil as Power watches. Aki eventually arrives and kills it with the bite of the Fox Devil.

At the hospital, Aki interrogates Denji privately about Power trying to kill him. Denji plays dumb to cover for the fiend, prompting Aki to uncuff her.

Soon after, Power moves into Aki and Denji’s apartment as part of Makima’s orders. As she settles in, she sticks to her promise to Denji and allows him three squeezes: one for saving Meowy, one for killing the Bat Devil, and one for lying to Aki.

While Power no longer has a reason to be a devil hunter since Meowy is safe, she stays to help Denji on the job. She then becomes part of the six-member squad for the Hotel Morin mission.

Personality and powers of Power in Chainsaw Man 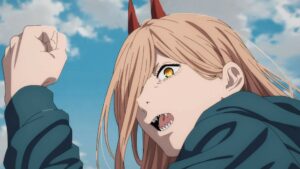 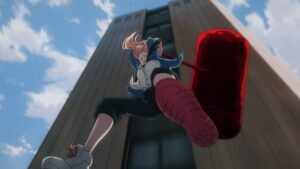 Power in Chainsaw Man often acts belligerent and self-centered with anyone she encounters. She firmly believes that she’s stronger than other devil hunters because of her status as a fiend. When put into tense situations, she often lies and puts the blame on others, similar to what happened with the Sea Cucumber devil.

Despite such troublesome behavior, Power starts to show compassion to close friends after being reunited with Meowy.

Previously the Blood Devil, Power has the ability to use her blood to create weapons. She also has a heightened sense of smell as well as faster regeneration compared to other devils and fiends.

A rookie devil hunter, Power first appears in the fourth chapter of the manga, which introduces her as the new member of Makima’s special squad.