Full list of the Twelve Demon Moons in Demon Slayer

A lot of overpowered individuals. 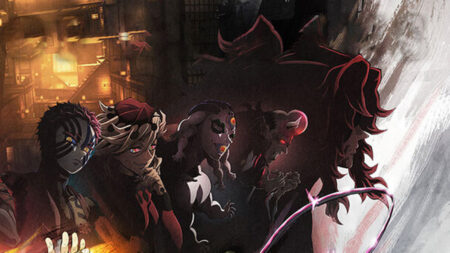 The fictional world of Demon Slayer is truly frightening, filled with demons that are capable of committing dreadful and horrific acts.

These demons all serve one master, Muzan Kibutsuji, the main antagonist of the Demon Slayer series.

Included in the Demon King’s horde of evildoers are the Twelve Demon Moons, or Twelve Kizuki – a group of elite and powerful demons that serve Muzan directly.

Each member of the Twelve Demon Moons has immense strength and the ability to heal and regenerate themselves. They all have unique abilities called Blood Demon Arts, which make them fierce opponents.

Here are all the Twelve Demon Moons ranked from weakest to strongest.

Spoiler warning: This article will discuss events from Season 1, Season 2, and the Mugen Train movie, along with upcoming Upper Rank Demons the anime has yet to introduce.

Kyogai, the Drum Demon, previously held the rank of Lower Rank Six before Muzan excommunicated him for not being strong enough during the Tsuzumi Mansion Arc.

The rank was then passed to Kamanue, a demon who scoffed at Muzan when all the Lower Ranks were summoned to the Infinity Castle during the Rehabilitation Training Arc. Muzan had executed Kamanue in anger, questioning the other Lower Ranks’ loyalty.

Rui is the main antagonist in the Mount Natagumo Arc and was the first of the Twelve Demon Moons introduced in the anime and manga. A demon who yearned for a family, he enlisted weaker demons to fill their roles in the “family” he always wanted.

Tanjiro Kamado, the anime’s main protagonist, was not strong enough to defeat Rui towards the end of Season 1. Before Rui’s Blood Demon Art: Murderous Eye Basket reached Tanjiro, the web was destroyed by the Water Hashira, Giyu Tomioka.

After learning that Rui was defeated by the Demon Slayer Corp, Muzan summoned all the Lower Ranks and scolded them for being too weak. Muzan killed Mukago for fearing the Hashira, executed Wakuraba for attempting to escape, and finished off Rokuro for asking for a portion of Muzan’s blood.

Enmu was the catalyst of events in the Mugen Train movie. He was the only Lower Rank to survive Muzan’s fury in the Tsuzumi Mansion Arc and was given a large amount of the Demon King’s blood, enhancing his abilities.

The sadistic demon then turns a large train into his base, causing the disappearance of 40 passengers.

Enmu was the only Lower Rank that came close to matching the strength of the Upper Ranks. He could also force anyone to deep sleep and control their dreams with his Blood Demon Arts, Sleep Inducement, and Dream Manipulation.

The two demon siblings were the primary villains in the Entertainment District Arc. Together, Gyutaro and Daki have defeated 22 Hashira in the past, with Gyutaro killing 15 and Daki eliminating seven.

Daki has the ability to turn her body into Obi, a sentient sash she can use for her Blood Demon Art Obi Sash Manipulation. Her Eight-Layered Obi Slash could level buildings, a technique she used to push Tanjiro near death.

Gyutaro has over a century’s worth of combat experience under his belt, defeating the best fighters from the Demon Slayer Corp. Even after he was defeated, Gyutaro was powerful enough to injure and maim the Sound Hashira, Tengen Uzui.

The cunning demon Gyokko will finally make his anime debut in the upcoming Demon Slayer Season 3 Swordsmith Village Arc. Gyokko is set to face one of the strongest warriors in the Demon Slayer Corp, the Mist Hashira, Muichiro Tokito.

Of all the demons in Muzan’s soldiers, Gyokko is the most monstrous and unsightly with infant-like hands cradling the side of his head as seen in the Season 3 poster and promotion reel.

Joining the battle against the Demon Slayer Corp in Season 3 is Hantengu, a demon with the appearance of a short frail man with a very thin and skeletal body.

Despite his appearance, Hantengu is an extremely powerful demon that has multiple tricks up his sleeve. He has immense durability, which is why the Demon Slayer’s Nichirin swords won’t make a dent in his body.

Even before he was turned into a demon, Hantengu was already a mentally unstable person who murdered innocent civilians. When caught, he claimed he was innocent and blamed others for his crimes.

He retained his human traits as a demon, making him even more unstable and dangerous.

As a member of Muzan’s elite group, Azaka is the demon who enjoys fighting the most. In his battle against the Flame Hashira Kyojuro Rengoku, Azaka purposefully drew out their clash so that he could convince Kyojuro to become a demon so they could fight forever.

Azaka is a master of hand-to-hand combat, a skill he honed as a martial-arts prodigy when he was a human. Combined with his Blood Demon Art which can send out destructive shockwaves, Azaka is unparalleled in close-quarters combat.

Doma first made his appearance in the Demon Slayer anime during the Entertainment District Arc as the Upper Rank Six that turned Gyutaro and Daki into demons. After many years of devouring humans, Doma moved up to Upper Rank Two.

As one of the most powerful demons in Muzan’s Twelve Demon Moons, Doma has a friendly and charismatic personality. However, under his carefree and unassuming demeanor is a cold, calculating character that possesses great perception and sharp intuition.

The flamboyant Upper Rank Two is the third strongest demon to exist in the series and will be one of the toughest opponents the Demon Slayer Corp will face.

As one of the strongest demons in Muzan’s army, Kokushibo strengths are unrivaled.

Nearly five centuries ago during the Sengoku Era, Upper Rank One was once a human who was a former Demon Slayer. In his quest to gain more power, Kokushibo accepted Muzan’s offer to become a demon.

The overpowered Upper Rank One will make his anime debut once Demon Slayers’ second movie, To the Swordsmith Village, hits theaters in February.

READ MORE: Who is Mamoru Miyano, the voice of Demon Slayer antagonist Doma?