In this case, familiarity breeds comfort. 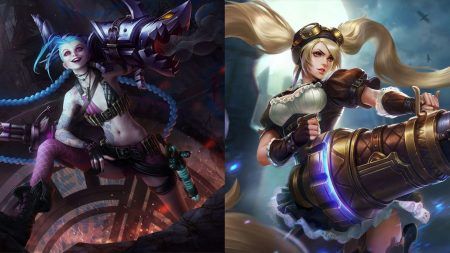 New to League of Legends: Wild Rift but not new to the MOBA genre?

Then you’re going to have a great time on the Rift with these beginner friendly Wild Rift champions that we highly recommend because they have similar counterparts that you may already be masters of.

When learning a new game, it helps to have a baseline relative to a character you’re already familiar with from other MOBAs like Mobile Legends: Bang Bang, Arena of Valor, and Dota 2. If a character functions in a similar way, you would be able to learn their abilities quickly while knowing how to carry out your role in-game.

Here’s our list of five League of Legends: Wild Rift champions and their close counterparts:

Both of these characters not only share broad shoulders, thick armor, a large sword, and a clean-shaven handsome face. They are also fighters who “spin to win”.

Arthur’s second skill, Void Portal, summons divine blades that circle around him, dealing damage over a duration. Similarly, Garen’s Judgment ability makes him spin rapidly with his sword around his body, dealing physical damage to enemy units in his path.

As melee juggernauts, they both possess a skill to help them gap close. Holy Light empowers Arthur, increasing his movement speed, allowing him to leap at his target to deal physical damage and slow them. If you like that, Garen’s Decisive Strike too, increases his movement speed and empowers his next attack as he lunges at his target.

Two frosty ladies with killer looks who enjoy slowing down targets and kite their way to victory? You’re in the right place.

Both Ashe and Drow Ranger are ranged carries who possess auto-attacks — Frost Shot and Frost Arrows — that slow. They also have cone-shaped abilities that shoot a flurry of arrows. Drow Ranger’s Multishot releases a bout of arrows in waves that hit enemies for extra damage and apply a longer slow duration.

Ashe’s Volley hurls arrows in an AoE in the target direction, each of which deal physical damage, slows, and can critically strike.

While not entirely the same, both of these archers do bring their own set of disables. Drow Ranger’s Gust can silence and knock back enemy units. Ashe’s ultimate, Enchanted Crystal Arrow, stuns upon hitting an enemy champion.

They like it fast, and they like it big. Attack speed is the name of the game for Jinx and Layla, whose goal is to rapidly auto-attack their opponents to death.

Layla’s Void Projectile Layla fires an energy ball that explodes and slows enemies down. Jinx’s equivalent is Zap!, where she too, fires a shock blast in the target direction that deals physical damage to the first enemy hit, slowing them for two seconds.

When it comes to flashy ultimates, both of these marksmen — or markswomen — deliver. Destruction Rush causes Layla to fire an energy cannon that deals physical damage. When Jinx casts Super Mega Death Rocket!, you guessed it, a large rocket launches which explodes upon colliding with an enemy champion, dealing physical damage to the champion and all enemies in the area.

Xin Zhao and Zilong both look like they belong in Mulan, and their similarities do not end there.

Zilong’s Spear Strike allows him to dash towards the target, dealing physical damage. He then performs a quick basic attack immediately after. As brothers in arms, meelee fighter Xin Zhao has his own gap closer too. Audacious Charge causes him to dash to the target enemy’s location, slowing them down while giving him bonus attack speed for a short duration.

These fearsome warriors are especially good in 1v1 situations, and both have a mechanic to isolate their targets. Spear Flip allows Zilong to lift an enemy over his back, dealing damage in the process. Xin Zhao’s ultimate, Crescent Guard, sweeps his spear around him, dealing physical damage to enemies hit and knocks away all else except his selected target.

Stretch! Grab! Picking a target off is the sole function of Blitzcrank and Franco.

Franco’s first skill, Iron Hook, launches his hook at a designated direction that hooks the first target hit. It not only deals damage, but also pulls the target towards him. It performs the same function as Rocket Grab where Blitzcrank fires his right hand in a target direction that catches the first enemy, dealing damage while pulling them to him.

As expected, these initiator tanks are able to bring even more crowd control to fights. Fury Shock causes Franco to slow enemies down. His ultimate, Bloody Hunt, suppresses an enemy unit for less than two seconds. Blitzcrank’s Power Fist knocks up enemies, and his ulttimate, Static Field, silences, damages, and destroys shields of nearby enemies in an AoE.

READ MORE: Everything you should know before you start playing Wild Rift