EVOS Legends VP on losing streak: ‘We don’t deserve to qualify for playoffs’ 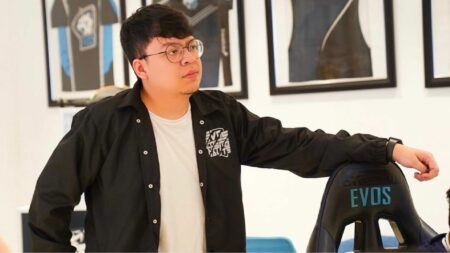 After dominating the first half of the regular season with a 5-2 record, the white tigers have yet to win a series in the second half, and are currently on a five-game losing streak.

They are now tied with rising stars Rebellion Zion in the sixth spot with a 5-7 record. With only two games remaining, EVOS Legends is now on the brink of missing out on the playoffs for the first time in history since MPL ID Season 1.

While longtime fans are hoping that the M1 champion will turn things around in the final week to qualify for the playoffs, EVOS Vice President Aldean “DeanKT” Tegar thinks otherwise.

In his Instagram story, DeanKT apologized to all the EVOS Legends fans after their recent reverse sweep loss to ONIC Esports.

“Losing five times in a row is indeed unacceptable,” he wrote. “With a performance like this, we really do not deserve to qualify for the playoffs.”

The organization also had to make multiple changes mid-season such as sending Ferdyansyah “Ferxiic” Kamaruddin and Raihan “Bajan” Ardy to MDL for Arthur “Sutsujin” Sunarkho and Rachmad “DreamS” Wahyudi.

In the second half of the regular season, the organization made a surprise move after EVOS Legends demoted their first Filipino import and superstar Gerald “Dlar” Trinchera to EVOS Icon. Rookie Rizqi “Saykots” Damank replaced him from the academy team, just hours before the deadline.

Still, the squad failed to find its footing in the last four weeks of the regular season.

Despite his disappointment in the team’s performance, DeanKT still hopes that EVOS will win its last two games. “Once again we are sorry and thank you for sticking around and supporting the team,” he added.

The white tigers will face their toughest challenge yet as they square off against Bigetron Alpha on Friday, September 30, at 6:15 p.m. GMT+8 and defending champion RRQ Hoshi on Saturday, September 31, at 7 p.m. GMT+8.

READ MORE: MPL ID Season 10 playoffs will be held in one of the largest venues in Indonesia