Don’t let his size fool you. 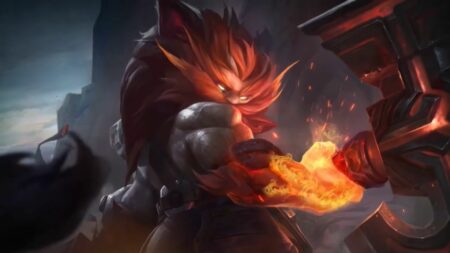 Aulus is a fighter hero in Mobile Legends: Bang Bang that has a straightforward and unique skillset.

Known as the original wielder of the War Axe, Aulus is a hero who excels at extended fights, pulverizing squishy enemies with his insane basic attack damage.

Learn how to play the Warrior of Ferocity in this Mobile Legends: Bang Bang guide.

Aulus’ basic attack adds a stack of Fighting Spirit to the axe. Each stack increases his physical attack by nine and physical penetration for five seconds, up to 4 stacks.

When Aulus’ axe full Fighting Spirit stacks, his movement speed is increased by 15% and his basic attack damage is increased to 125%.

When Aulus, Charge! is held down, he gains 45% extra movement speed and 30% damage reduction against from the front for up to 4s.

If the skill is released before the duration ends, he will unleash his fury and smash the ground, dealing damage to enemies in the area and slowing them for 1.5s.

Second skill – The Power of Axe

Aulus wields his axe, dealing damage to enemies in a fan-shaped area and enhancing the next 1-6 basic attacks attacks based on the number of non-minion enemies hit.

He greatly increases his attack speed and recovers his HP after each basic attack.

Passive: Every time the ultimate is upgraded, Aulus crafts a part for his axe to enhance his basic attack damage, physical lifesteal, and attack range in order.

Active: Deals damage to enemies in a line and greatly slows them for 5s.

Tips and tricks for Aulus

Aulus is weak in the early game and is very vulnerable against early game juggernauts. With this in mind, Retribution is the best battle spell for him as jungling levels you up faster, thanks to his fast wave clear with The Power of Axe.

Flicker is the best battle spell for him if you’re playing him in the side lane. It’s possible to succeed with him in the side lane, but you have to play it safe so that you won’t get left behind. Flicker allows you to escape if you find yourself in sticky situations, or finish off escaping enemies.

Aulus relies on his basic attacks so having high movement speed works wonders all throughout the match. With this, the Assassin Emblem tree is the way to go for the Warrior of Ferocity.

This is the only effective emblem build for him, as it gives Aulus the necessary stats to dominate.

For his item build, building your preferred boots first is vital before going for your other offensive items. Based on how the top Aulus players build him, War Axe and Windtalker are his core items.

Here is a common item build for a jungle Aulus in a typical game.

A guide on the best build for Aulus in Mobile Legends

You can swap Warrior Boots with Tough Boots if the enemy has more magic damage. If you are behind, you can swap Blade of Despair with defensive items such as Brute Force Breastplate or Athena’s Shield, depending on the enemy’s lineup.

When playing Aulus, always remember that having max stacks of Fighting Spirit is the key to victory. With that, this guide aims to max out his stacks immediately.

When facing one enemy, a good combo would be to rush him with Aulus, Charge! basic attack, The Power of Axe, another basic attack, then Undying Fury. This is always a sure kill especially if the enemy has no escape skill.

In team fights, it’s best to use Undying Fury first before Aulus, Charge! Once you are in the middle of the team fight, use The Power of Axe and hit as many enemies as possible.

Assuming you have the max enhanced basic attack stack, lock in on the enemy with the least amount of health and hit them hard with your basic attacks.