T1 Oner: ‘I want to say that I’m the best Lee Sin player’ 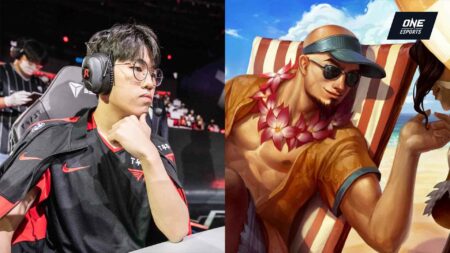 T1 went up against DRX, who also had a 4-1 record, and were looking to bounce back from upsets earlier in that week. T1 just came from a hard-fought loss against Kwangdong Freecs that broke their 24-match winning streak.

At the 12-minute mark, Oner grabbed a solo kill on Kim “Zeka” Geon-woo‘s Ahri. Despite getting charmed after his Sonic Wave-Resonating Strike combo, the Lee Sin player flashed into the enemy mid laner to land Tempest and followed up with auto attacks.

As they approached the enemy turret, Oner finished Zeka off with a flashy combo of Dragon’s Rage, Sonic Wave, and Resonating Strike.

Hwang “Kingen” Seong-hoon’s Gnar tried to trade blows with the Gwen player while the T1 jungler was hiding in a nearby bush. Once Kingen got close enough, Oner engaged with a flash-kick combo.

The Gnar player tried to escape by transforming and stunning them with Wallop, but the T1 duo was right on his Yordle tail. Oner zoned him out with a Sonic Wave and Zeus secured the kill with a few snips. 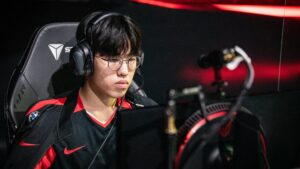 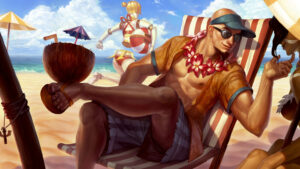 T1 emerged victorious in game one, with Oner winning the Player of the Game award by unanimous decision.

During a post-match press conference, the jungler elaborated on why Lee Sin is still a strong pick in the current meta. Since the champion received buffs to his base AD, Oner felt that he doesn’t fall behind other AD jungling champs like Viego and Wukong.

When it comes to bringing out the best from the champion, he said that Lee Sin needs to be positioned well so that he can threaten enemy carries.

Lee Sin looks to be a priority pick for Oner during matches against top teams. Aside from DRX, Oner played the champion twice against DWG KIA in Week 2. He currently has an 80% win rate on the Blind Monk after five games.

“I want to say that I’m currently the best Lee Sin player. However, depending on the playstyle, there might be someone better than me,” said Oner during the post-game press conference, according to an Inven Global translation.

Fans can watch the 2022 LCK Summer Split on the official English and Korean Twitch LCK channels.