It’s a lovely day. Here we see Sumeru’s new boss, Jadeplume Terrorshroom, in its natural habitat. From afar, the mighty fungal beast looks terrifying with its sharp talons and gigantic tail. The creature struts around its nest all day, ready to unleash its Dendro fury on unwary travelers.

This monster is one of the new bosses introduced in Genshin Impact version 3.0 alongside the Electro Regisvine in the Sumeru region. While its name can be a mouthful, defeating this Dendro boss is child‘s play.

Here’s everything you need to know about this new Sumeru boss, including its location and how to unlock it.

Simply head to the region’s Vissudha Field area to unlock and challenge the lord of the fungal beasts.

This Dendro beast is located on the top part of Vissudha Field in Sumeru.

Teleport to the nearest waypoint and climb your way up north. Once you spot a blackhole-like portal just above a group of red mushrooms, fly towards it and you will be teleported to the Jadeplume Terrorshroom’s location.

This entrance is similar to accessing the Perpetual Mechanical Array boss located at Jinren Island in Inazuma. 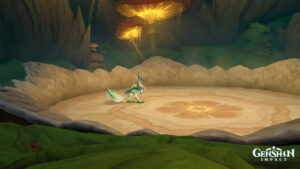 This boss is an evolved Fungus that has a special activated state when it is hit by Electro attacks and Catalyze (Dendro + Electro) reactions. As soon as its rage meter fills up, it will enter the activated state where it will unleash more fearsome attacks until it becomes exhausted.

Pyro is the most effective element against this boss, so you can use Pyro DPS like Hu Tao, Klee, or Diluc, and sub-DPS like Xiangling or Yanfei to put it in a Burning (Pyro + Dendro) state.

Be sure to also bring shielders like Thoma, Diona, or Zhongli to counter its attacks, especially since Pyro attacks will trigger it to attack and spread spores around when it‘s not in its activated state.