How to get the Sapwood Blade for free in Genshin Impact

A must-have for Catalyze comps! Following the release of Sumeru, players can now forge a free sword called the Sapwood Blade. The weapon looks to be the perfect piece on the Traveler, who’s becoming a viable Dendro support character for Catalyze teams.

If you want to add the 4-star sword to your arsenal, here’s a detailed guide on how you can get the Sapwood Blade and upgrade it in Genshin Impact.

How to craft the Sapwood Blade in Genshin Impact

To get the blueprint for the Sapwood Blade, you must complete the first two parts of the Aranyaka world quest. You can start this lengthy questline by following the path going east from Gandharva Ville and approaching a girl named Rana who’s surrounded by a group of Fungi.

Rana will request your help in clearing a nearby Withering Zone. Once done, she will direct you to the Vilmara Village to talk to the locals about the Aranara, a race of plant-like creatures. You will end up accompanying Rana in other tasks, such as clearing out more zones and attacking spinocrocodiles.

The next day, you will aid Rana in rescuing Iotham, one of the kids from the village. After saving the kid and escorting him back to their village, you will meet Arana, an Aranara who protected Rana after the fight. The creature will ask you to “sing” to open their world. 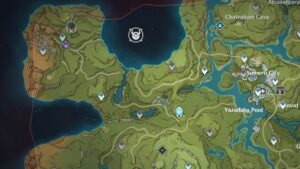 Head back to Vilmara, where Rana’s grandpa, Amadhiah, will give you a Vintage Lyre. From there, you’ll take a Waverider up to Vanarana, the home of the Aranara. You can keep track of the route by following the green traces.

Once you reach the end of the trail, you must equip the Vintage Lyre and play the displayed melody under a strange wooden arch. The pattern is: fa, mi, so, fa, do in the top row (treble clef).

Upon passing through the Phantasmal Gate, you must collect 15 Phantasmal Seeds in 90 seconds. Obtaining a seed will refresh the timer. Once you’ve collected 15 seeds, you can interact with a gate to complete the trial.

You’ll play the tune once again in front of a stone statue and find yourself in the home of Arama. The creature explains that you need to help them out to gain the Aranara’s trust and finally see Vanarana.

After doing three tasks marked on your map, you must climb a cliff and meet Arama, who talks about a Vanagni threat. Climb down to defeat the group of four Pyro Whopperflowers.

Arama then leads you back into the village to play the Lyre once again in front of “Silapna”, the stone statue. Now in the dream world of Vanarana, you’ll make your way to Araja, who explains how you can save Rana. 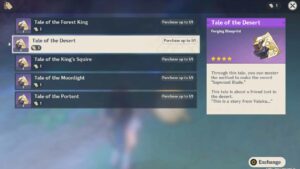 Araja will give you the quest item Stories of You and the Aranara. In front of Araja’s house, you can take the four-leaf sigil trail into a nearby cave. Inside the cave, you’ll meet Aravinay, an NPC merchant who sells the Tale of the Desert, the blueprint for Sapwood Blade.

There are four other weapons available from Aravinay. If you’d like to unlock them, you can collect the rest of the specific quest items through the Aranyaka questline. 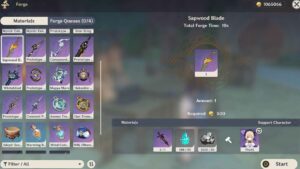 To learn how to make the Sapwood Blade, head over to a Blacksmith and select “I’d like something made”. Select the option to learn The Tale of the Desert in the crafting menu, and Sapwood Blade will show up as a craftable weapon.

Here are the materials needed to craft the Sapwood Blade:

You can obtain the Midlander Sword Billet by either farming the Sumeru Trounce domain or making it at any crafting bench.

Just like other weapons, you can refine the Sapwood Blade by consuming duplicates of the 4-star sword in the character or weapon menu.

Stats and ability of the Sapwood Blade

The Sapwood Blade works best when equipped on a support character in a Dendro-related composition.

The sword’s ability Forest Sanctuary drops a Leaf of Consciousness whenever your team triggers a Dendro reaction. The leaf grants 60-120 Elemental Mastery depending on the weapon’s refinement rank.

Keep in mind that only the on-field character will receive the buff so make sure that your DPS is the one who picks up the leaf.

Talisman of the Forest Dew 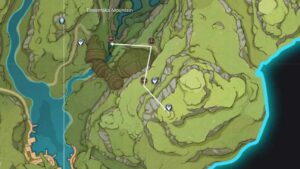 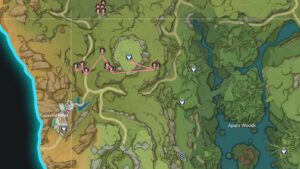