Get free Primogems by following this shaggy sumpter beast 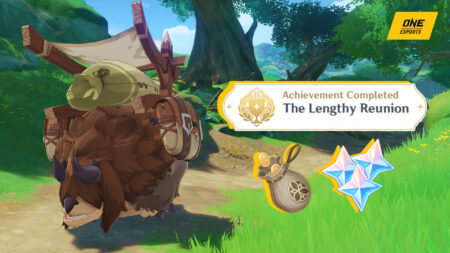 Genshin Impact’s version 3.0 has opened a lot of content for travelers who are keen on exploring Sumeru. One of these involves following the region’s gentle giant, a shaggy sumpter beast, following a path around Vissudha Field. Sounds easy, right?

This hidden achievement is called The Lengthy Reunion, which will test travelers’ patience and creativity as you accompany a roaming, giant creature without killing it or triggering battles throughout its journey.

Here’s everything you need to know on how to complete this achievement, including its location, map route, tips and tricks, and rewards.

How to unlock the quest: The Lengthy Reunion location Follow the sumpter beast that has lost its owner until it finishes its journey.

After successfully killing the owner, an exquisite chest will appear and the hidden achievement “The Lengthy Reunion” will be unlocked.

While following the shaggy sumpter beast, you will encounter seven monster and enemy camps.

Tips and tricks to unlock this Genshin Impact hidden achievement

After successfully following all the steps, an exquisite chest will appear beside the sumpter beast, with the following rewards inside:

You will also receive five Primogems and a notification that you completed the achievement.