The 3 best Gabe Newell openings at The International

Which Gabe Newell opening is your favorite? 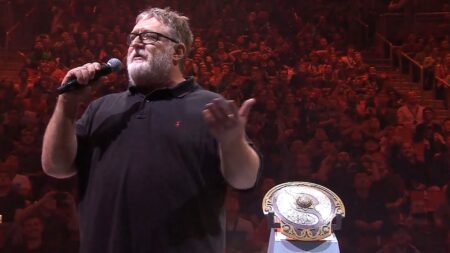 Gabe Newell (called Gaben by the community) is the president of Valve. Gabe launched Steam in 2003, which is now the home to over 34,000 game titles since 2019.

One of the biggest games on Steam is, of course, Dota 2.

After acquiring Dota 2, Valve has had a yearly tournament called The International (TI). TI involves the 18 best teams from all over the world to compete for the biggest prize pool in esport history.

Since the first International, Gabe Newell has kicked off the tournament with a speech as part of its tradition. Here is our ranking for the three best openings by Gabe.

The 3 best Gabe Newell openings at The International

Gabe entered the stage looking confident in the TI9 opening ceremony. He stood in front of the iconic Aegis of the Immortal, the trophy awarded to teams for winning The International.

TI9 was the first International hosted in China, and Gabe opened his speech by thanking the citizens of Shanghai for their hospitality and concluded in Mandarin, a nice local touch.

Gabe also posed an interesting question, “Will we finally have a repeat winner?”

It all seems way too prophetic now, after OG’s second win at The International 9.

It was a short opening ceremony, but Gabe’s intro, his use of Mandarin, and his confidence are why this ranks as the third-best opening at The International.

One of the best things about the earlier introductions to the International was the light and smoke show that always played before Gabe got on stage.

Later Internationals had milder introductions, which lacked the splendor of the earlier years.

Out of all the light and smoke shows at The International, TI4 is the best. All the lights were turned off except the stage light. Then, a rumbling resonated throughout the stadium, signaling that something big was coming.

When the light turned on, the Aegis of the Immortal was seen covered in smoke. A familiar sound played, the sound of heroes spawning in Dota 2.

A voiceover welcomed the audience, and then a figure emerged from the smoke. It’s Gabe Newell, and he was there to say the immortal line, “Welcome to The International”.

Gabe thanked the fans for coming, for supporting Valve, and for making the tournament happen. Beautiful lights, a great entrance, and a nice speech by Gabe are why TI4 has the second best Gabe Newell opening so far.

TI8 had the best Gabe Newell opening to The International and it’s not even close.

The reason TI8 ranks as the best opening speech by Gabe Newell is due to his use of humor. Gabe mixed in community jokes and memes along with thanking the host country, Canada.

The best part of his speech was Gabe’s use of “Lakad Matatag”, the phrase that propelled the late Aldrin Paulo “Dunoo” Pangan to stardom. It was cheeky at the time, but now his use of the line has acquired sentimentality as well.

The best use of “Welcome to The International”, the humor, and the references to Dunoo make this the best opening by Gabe Newell so far.