Why Tidehunter is the most picked hero at TI10 so far

An absolute beast at The International. 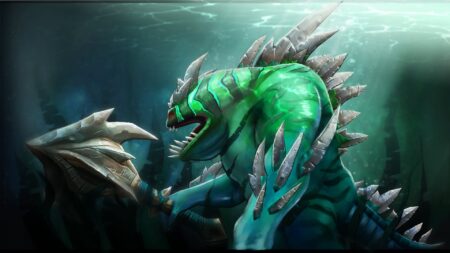 The first day of The International saw explosive performances from all competing teams.

20 matches were played, and 92 heroes picked. As teams try out different drafts and heroes, it’s looking like one of the most versatile patches yet.

Of all the heroes being picked, Tidehunter is showing up the most. Out of the 15 times he was picked across 40 games, 10 resulted in victory.

What is it about the hardy offlaner that pros value so much on Dota 2 patch 7.30d? And how has he managed to achieve a 67% win rate at the biggest esport event in the world?

1. This hero is hard to kill

Heroes such as Axe, Timbersaw, and of course, Tidehunter, are responsible for shielding their allies.

Out of all the offlaners in the game on Dota 2 patch 7.30d, this hero has one of the best damage mitigation abilities in Kraken Shell, which reduces damage from physical attacks by 54 per hit. Kraken Shell also dispels Tidehunter every time he receives a certain amount of damage, removing slows, stuns, and silences.

Tidehunter’s durability allows the hero to absorb a tremendous amount of punishment at all stages of the game, and is almost impossible to zone out during the laning stage.

Due to how immensely tanky Tidehunter is, he is almost guaranteed to have a good laning stage. But even in difficult situations, such as a tri-lane set up by the enemy, Tidehunter can easily recover by going to the jungle.

Anchor Smash reduces the enemy’s physical damage by 60% (80% with talents) and lasts six seconds on a four-second cooldown, allowing Tidehunter to have more than 100% uptime on his debuff, as long as he sticks on enemies.

Anchor Smash also deals AoE damage and works on creeps. This makes Tidehunter one of the best heroes at clearing out stacks early in the game with a max-level Anchor Smash. It doesn’t matter if he has to leave the lane, he’ll simply get his farm somewhere else.

3. Ravage is one of the best team fight ultimates in Dota 2 patch 7.30

Tidehunter’s ultimate is one of the most iconic spells in Dota 2. Ravage is a massive AoE spell that damages and stuns all enemies. It has a long cooldown and doesn’t pierce magic immunity, but remains an extremely potent spell.

Tidehunter’s durability means it is almost impossible to stop him from using Ravage. If he is controlled by stuns or silences, he will shrug them off and use his ultimate regardless.

One Ravage is devastating enough, but thanks to Anchor Smash in Dota 2 patch 7.30d, Tidehunter can farm for a Refresher Orb and use two Ravages in a fight. At max level, that is 7.6 seconds of AoE stun, and 800 damage.

Tidehunter has a lot going for him at TI10. He is a great laner, farmer, and incredible in team fights. The hero will likely remain highly contested throughout the entire event. Since this is just day one of TI10, there is a lot of the meta in Dota 2 patch 7.30d left to explore.

READ MORE: The 5 best midlaners to watch out for at TI10