The manga is still ongoing. “Yes, my Lord” is probably the first thing that rings in our heads when we see Ceil Phantomhive and Sebastian Michaelis in Black Butler cosplays.

Created and illustrated by Yana Toboso, Black Butler (Kuroshitsuji) is a dear title to many manga and anime fans. Debuting in 2006, the manga is still ongoing, and the resolution of the diabolic contract between the dual protagonists is still nowhere in sight as they continue their adventures in Victorian England.

Toboso is a master of character design, amplified by her intricate art style. Every hero and villain stands out, with outfits that complement their personality — and are therefore incredibly fun to cosplay.

A power duo themselves, Weilanran and Lujiuerhei collaborate again to bring Ciel and Sebastian to life.

Set in the Victorian era in the 1880s, the events of Black Butler are set in motion when Phantomhive Manor burns down in the middle of the night, and along with it, Ciel Phantomhive’s parents and beloved dog.

Unidentified attackers then kidnap young 12-year-old Ciel and throw him into a cult.

During a ritual one night, a demon appears before him and they strike a deal: in return for exacting revenge against those who destroyed the House of Phantomhive, Ciel will give up his soul. The contract is sealed with a symbol in Ciel’s right eye, which is why he wears an eyepatch.

The duo return to society, and the demon (who Ciel names Sebastian after his dog) disguises himself as a butler. He learns the trappings of his new role, from mannerisms and brewing tea the way Ciel likes it to cooking human food to perfection.

They appear perfectly normal on the surface — except for the fact that Sebastian is a demon who is preternaturally smart, strong, fast, and also immortal. 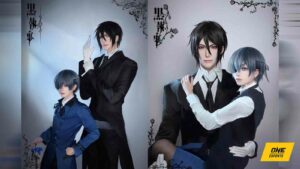 Needless to say, the premise alone makes this story an interesting one right from the start. But what’s even more intriguing is Sebastian’s character.

He plays the role of a “human” butler and Ciel’s right-hand man perfectly, but he also becomes Ciel’s only family. He is the one person who understands Ciel inside-out, yet he is also the one who will eventually take his life.

Their relationship is a complex one, marked by a stark duality where subservience and dominance, as well as protection and aggression, overlap with one another — qualities reflected in Weilanran and Lujiuerhei’s Black Butler cosplay.

Fans will also appreciate Lujiuerhei’s individual shots of Ciel, where they capture his painful past and icy demeanor in one look, but also his commendable inner strength.

Ceil is a prime example of steely resolve in the face of seemingly insurmountable adversity. While often aloof, he displays genuine concern for the well-being of his loved ones, even jumping in front of a bear to defend Elizabeth Midford.

His determination and laser-sharp focus on his end goal are admirable — even if his means leave much to be desired. He inspires unwavering loyalty, testament to the strength of his character and his presence of mind.