Featuring some of the most impassioned battles of Koyoharu Gotouge’s renowned work thus far, the Entertainment District Arc culminated in an intense battle between the Demon Slayer corps and Muzan Kibutsuji’s Twelve Demon Moon villains.

Demon Slayer’s second season also introduced viewers to demon siblings Gyutaro and Daki, who have become fan favorites in the series, inspiring many talented cosplayers to bring them to life.

G4’s Attack of the Show host, Gina Darling, brings the sadistic and prideful Daki to life through a series of photos shared on her social media.

The WWE Arena talent perfectly captured details about Daki’s look — the eerie gleam of her lime green eyes and contact lenses that includes characters for the Upper Six.

She also nailed Daki’s dreaded action poses, right before she sends out her Obi Sash Manipulation, which can do serious damage to anyone caught in its wake. 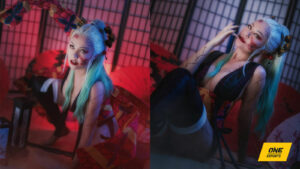 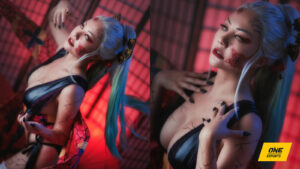 The next season of the anime, the Swordsmith Village Arc is expected to be released in the second half of next year.