Being anti-celestial never looked this good. 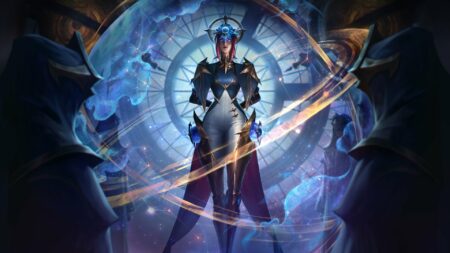 The Stargazers were founded for the sole purpose of protecting humanity from cosmic threats. This starry squad currently has three members — Camille, Soraka, and Twisted Fate.

Meanwhile, Stargazer Soraka shows us a scholarly style with long robes, her crescent staff on her left hand, and a crimson-covered book on her right. This Soraka skin is actually quite refreshing from her current ones in League of Legends since it covers her otherworldly pair of eyes.

This “no-eyes” thing seems to be the in-thing in this skin line as Stargazer Twisted Fate adopted the same fashion only with a gorgeous miter hat. His deck of cards has a gold and silver finish which perfectly gives a popping contrast to his royal blue garments.

These new Wild Rift skins will be released throughout patch 2.2A.

While our favorite League of Legends skins has always been ported to Wild Rift, Riot Games has not made any announcements if the Stargazer skin line will be available in the PC version.

READ MORE: This is probably the fastest first blood you’ll ever see in a pro game of Wild Rift