After nine years as a pro, it’s time for a change. 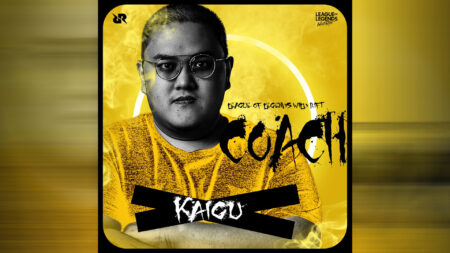 The Wild Rift esports scene has officially begun, and the first wave of teams are jumping into the Rift for the Summer Season. RRQ Philippines carries the banner of one of the biggest organizations in SEA, though for the team of newcomers, it’s been a bit of a bumpy ride.

The team was able to take down Execration during the Preseason of the Wild Rift SEA Icon Series Philippines, but fell to Sunsparks and Team Secret in the lower bracket. The team still placed 4th overall, and had an impressive showing for a new team on the block.

Leading the team is Coach Kaigu, a first-time coach with a world of experience in the League of Legends scene. Jon “Kaigu” Lance Hernandez is a known player in the League of Legends community and was a player for Team Mineski when they competed at the Season 3 World Championship in 2013. After nine years as a pro player, Kaigu has now taken on the coach role, although he admits he’s still learning the ropes.

He bases his coaching style on his League of Legends PC experience and credits Southeast Asian League coach Akarawat “Cabbage” Wangsawat and JM “3Finger” Dualan from Mineski for training him.

He shares that his League knowledge has carried over to Wild Rift on mobile, despite the faster pace of the game. His real challenge is coaching the players themselves, as rookies in the professional scene.

“We scrim four to five teams a day and review our games,” he told ONE Esports. “We review the VODs, look for our mistakes, and see what we can improve on. I’m used to the pressure, but the players are quite young and new to being pro players. It’s a bit heavy for them, but I believe they can handle it.”

Kaigu says he’s been interacting well with the team, even though he was the outsider of the group. For the upcoming Wild Rift SEA Icon Series Summer Season, he’s optimistic about RRQ Philippines.

“I believe we exceeded everyone’s expectations with our performance during the Wild Rift SEA Icon Series,” said Kaigu. “What the team lacks the most is competitive experience and the upcoming Summer Season of the Wild Rift SEA Icon Series is the perfect opportunity for them to hone their in-game decision making and get rid of the occasional nerves they experience. We also need to work on our team communication especially during high-pressure situations. We’ll be training harder.”

He also says he’s excited for Wild Rift esports as it’s also a reunion for the old Mineski team, albeit on opposing teams. “I’m excited to see my former teammates, even if we’re now on different teams. Hamez is with Secret and Exosen is with Liyab, it should be fun.”

Catch RRQ Philippines and the rest of the Southeast Asia Wild Rift teams as the qualifiers for the SEA Icon Series Summer Season begin this week.