‘Yoru is a liability, he’s not going to be used much’ says Hiko

Will Yoru’s abilities be reworked? 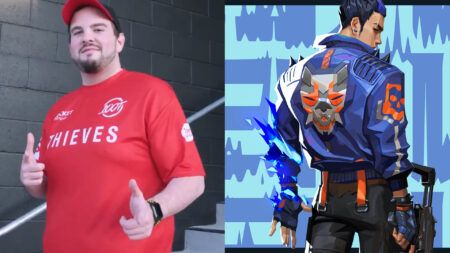 Valorant’s newest agent, Yoru, already has the community buzzing with regards to how he fits into the meta. Just a few days after the lurking duelist was released, the pro community shared their thoughts on Riot Games’ latest polarizing agent.

After taking a much needed break following 100 Thieves’ First Strike NA championship win, Spencer “Hiko” Martin made his return to streaming and revealed his opinions about Yoru.

Hiko believes that Yoru’s kit is perfect for outplaying opponents. But his strengths as an attacker do not outweigh his liabilities on defense. “He has no stall [abilities], he only has two [Blindside] flashes, he’s going to have to make a play instantly with his [Gatecrash ability], and his [Fakeout] footsteps are really obvious,” Hiko noted, “I still don’t think he’s going to be used very much.”

Then there are Sentinels’ Hunter “SicK” Mims and TSM’s Taylor “drone” Johnson, who believe Yoru is just a bad agent altogether. Keep in mind, SicK is known for having the most diverse agent pool in the competitive scene. SicK has played duelist, initiator, and sentinel agents in tournaments; he even added Skye to his player pool in the First Strike NA tournament.

SicK and drone see Yoru at the bottom of the duelist meta and are asking to have his abilities reworked because they’re convinced that they’re too loud. In the pro setting, where every advantage can lead to sudden wins and losses, sound cues are extremely important in gathering information. This makes Yoru predictable and easy to counter.

Fellow TSM pro player Yassine “Subroza” Taoufik chimed in, saying Yoru will find his place in the lower ranks of competitive play. This could be because some players in the lower ranks don’t take full advantage of the audio cues made by their opponents, so Yoru can easily catch them off guard.

We already have the biggest names in the community, including streamer superstart Tyler “Ninja” Blevins, sharing their incredible plays with Yoru. On his end, Ninja used Yoru’s Dimensional Drift ultimate to gather information for his team, venturing within the enemy lines to catch them by surprise.

Then there’s Cloud9’s Tyson “TenZ” Ngo, who recently stepped down from competitive play. TenZ showed some crazy entry frag plays with Yoru after combining his Gatecrash ability with the Blindside flash.

Valorant fans who are interested in learning more about Yoru can read our beginner’s guide.