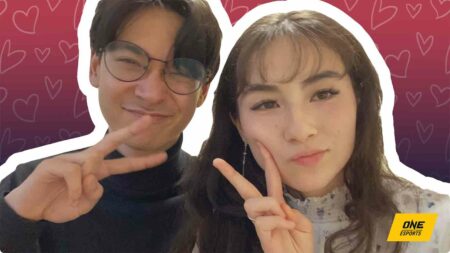 Tyson “TenZ” Ngo and Kyedae “Kyedae” Shymko are the Valorant power couple that we all wish we could be.

From offering to help replace a 15-year-old streamer’s PC to giving each other the best birthday gifts, the pair have cracked the code to getting the internet to fall in love with them. Then there’s their new addition to the family – a brown pet poodle named Mochi with eyes like melted chocolate.

They may also be rubbing off on each other. In a recent Valorant game, it was Kyedae on Korean duelist Jett instead of the Sentinels star. She then went on to find an ace with Jett’s Blade Storm, landing several clean headshots on enemy players as TenZ coached her.

Clearly, dating one of the world’s best aimers has its perks.

Don’t mess with Kyedae on Jett

In yet another adorable turn, the couple were playing Unrated matches on accounts named after their pet poodles Mochi and Kuro.

After activating Blade Storm, the 100 Thieves content creator found a quick kill on the enemy Yoru at B Link, just as the rest of the team was hitting A. With the enemy in control of the site, she retreated to A Heaven, with TenZ telling her how to peek out.

“One dagger on each person,” he said. “All you gotta do is just float in.” By jumping and then using Jett’s passive to “float” in, players can throw off their opponents’ crosshairs while taking advantage of the full moving accuracy of her knives.

Kyedae then proceeded to get four kills in rapid succession on the attackers at A Main and Hell. Unfortunately for her, the game did not register it as an ace because one of those kills was on a Brimstone who had just been revived by Sage.

Nevertheless, the streamer could barely contain her excitement. “Suck on that,” she crowed, before appearing to catch herself mid-celebration. “I’m just playing an Unrated I shouldn’t be getting hyped up.”