Get ready for some Polskie karate. 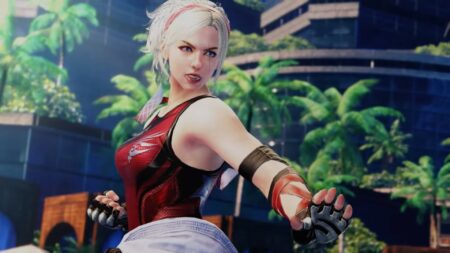 After weeks of being teased to the Tekken playerbase, Bandai Namco has finally announced that its newest Tekken character, Lidia Sobieska, will be out on March 23. Lidia will be the eighteenth DLC of Tekken 7.

Lidia’s launch trailer unveiled what the Polish prime minister looks like in action. Instead of her initial political attire, Lidia now gears up with a red athletic tank top along with padded gloves and sandals. She also wraps a karate gi around her waist with her signature black belt that was teased just a week ago.

As for her moves, Lidia truly lives the life of an adept karateka, throwing out stances and parries on the fly. She also has launch kicks that go straight into a corkscrew, meaning that she can use quick and short juggles to chip down the opponent.

Lidia has strikingly similar qualities to Heihachi and Jin. In her trailer, you can see her beat out Heihachi’s Raijin stance attack with her own gut punch. Compared to Jin, her move list also contains a similar Mental Alertness stance that gives her new moves and a grounded Black Out punch.

Lidia will also come with the new Island Paradise stage, giving Tekken players a more vibrant place to fight out their battles. The two DLCs will be out on March 23.

You can check out the full launch trailer below: