The San Francisco Shock are your OWL Stage 2 champions

The perfect end to a perfect stage. 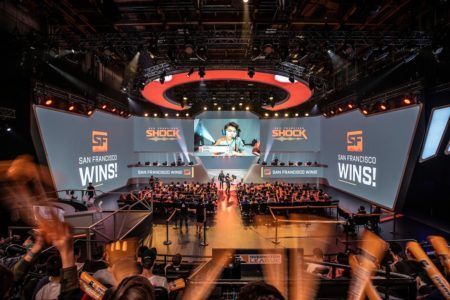 The San Francisco Shock capped off their perfect Stage 2 by shocking the undefeated Vancouver Titans 4-2 in the Overwatch League Stage 2 finals, winning their first Stage championship and US$200,000.

The match was a rematch of the Stage 1 finals, which saw the Titans prevail 4-3 over the Shock in a nailbiting seventh map on Rialto.

King’s Row was next, with both teams again playing mirror GOATS comps, and escorting the payload to completion with over three minutes left in the time bank each. On their second run, the Titans fell just short of completing, but managed to stall out the Shock right before the second checkpoint, taking the map 5-4 and tying up the series.

Paris was the next map, and this time, the Titans showed why they’re the favorite to take the Season 2 championship, holding the Shock at Point A and busting out a four DPS comp of Pharah, Hanzo, Soldier, Sombra, Wrecking Ball, and Mercy to take the point during their own attack with over three minutes to spare, winning the map 1-0 and taking a 2-1 series lead.

Following that was Watchpoint: Gibraltar, with both teams back on mirror GOATS comps. San Francisco finished their run with 1 minute 38 seconds left on the clock, while Vancouver required overtime to complete. On their second push, San Francisco held Vancouver before the first checkpoint, and then pushed the payload to victory with over a minute to spare thanks to a clutch play from Grant “moth” Espe’s Lucio who booped Min-soo “SeoMinSoo” Seo’s Zarya off the high ground and away from his team, letting the rest of San Francisco clean up, and tying up the series 2-2.

The series went to Oasis next, with the Shock once again showing their dominance on Control, denying the Titans a single round, and taking a 3-2 lead.

Next up was Blizzard World. The Shock attacked first, and pushed the payload to just meters from completion. On the Titans attack, the Shock held them from reaching the second checkpoint, taking the map 2-1, winning the series 4-2, and handing the Titans their first loss of the season.

Next for the Overwatch League is the All-Star event, which kicks off on May 16. Regular season games will return with the start of Stage 3 on June 7.