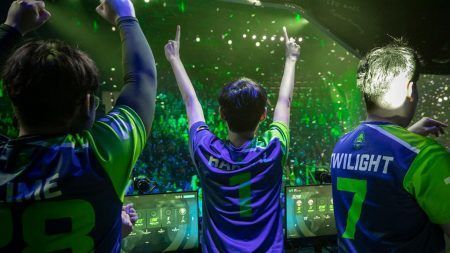 The Vancouver Titans have made history in Stage 1 of Season 2 of the Overwatch League (OWL). Not only have they become the first-ever expansion team to win a Stage Championship, but they are now also the first OWL team to do so without losing a single match in both the regular season and the playoffs.

Sweet, sweet victory for the @VancouverTitans!

THEY ARE THE #OWL2019 STAGE 1 CHAMPIONS! pic.twitter.com/oABtfmcabb

The Titans rampaged through the regular season to finish with a clean 7-0 record — not to mention a 24-6 map record and a +18 differential — to lead the Pacific Division.

They then made short work of the Boston Uprising and Seoul Dynasty in the playoffs, sweeping both on the way to a grand final matchup against the San Francisco Shock — who themselves swept the inaugural season’s grand finalists, the Philadelphia Fusion.

While the Titans seemed nigh unstoppable before the finals, things didn’t come easy for them against the Shock.

San Francisco aptly opened the finals with a shocker, taking an unexpected one-map lead with a 2-1 win on Nepal. While the Titans quickly tied things up by taking Game 2 in Numbani, they seemed really vulnerable after the Shock grinded out a 4-3 victory in Temple of Anubis.

The Titans struck back to take Game 4 in Dorado, but the Shock outmuscled them in Ilios to take a commanding 3-2 lead.

In the pivotal Game 6 on King’s Row, the Titans showed the finesse that made them one of the league’s top teams to force a deciding Game 7 with a 4-3 overtime win.

In the winner-takes-all slugfest on Rialto, the Titans made yet another historical OWL feat with a 3-minute, 34-second attack run — beating the previous record of 4:27 on the map. But in the end, the Titans grinded out another 4-3 OT victory to take the series and the OWL Season 2 Stage 1 title.

With their win, the Titans walk way the early favorites to win it all in Season 2, as well as having a US$200,000 prize in their pockets. They will look to continue their streak in Stage 2, which begins on April 4.