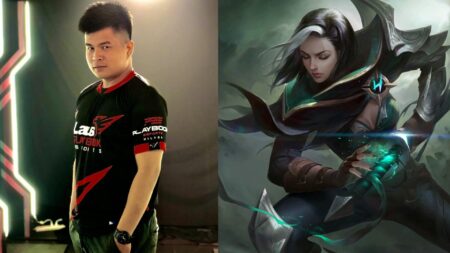 And it wasn’t just any other win, as Beemo’s Benedetta successfully pulled off a Hail Mary backdoor play to upset Omega in a stunning turn of events.

In the final moments of game three, both teams were slugging it out in the Lord pit. Omega Esports won the exchange as they managed to take down Aspect’s Yi-Sun Shin, Arvs’ Silvanna, and the Lord.

But while everyone was busy doing their thing in the Lord pit, no one noticed Beemo’s Benedetta split pushing in the bottom lane. It was only when Omega Esports secured the Lord that they realized Beemo and a number of minions were marching towards their base.

Toshi’s Beatrix managed to recall in time just to kill Beemo and the siege minion who dealt a ton of damage on their base, but with only 1 HP remaining on Omega Esports’ base, the rest of PlayBook Esports, along with some minions, marched down the mid lane to finish what Beemo had started.

Omega Esports tried to defend their base but one basic attack from Ryota’s Barats was enough for PlayBook Esports to complete the upset.

Beemo’s heroics earned him the MVP of the game despite a measly 1/6/4 KDA.

PlayBook Esports, who have a 2-3 record, are still last in Group B but this was a much-needed win that will keep them in contention for another week.

Meanwhile, Omega Esports stay in third place with a 2-2 record.