Life is about living on the edge and enjoying the kill. 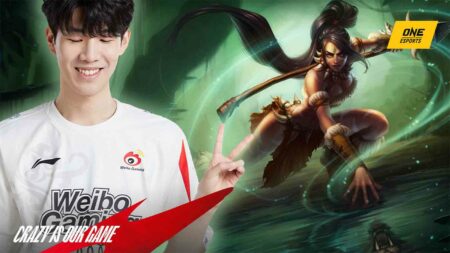 After tanking on Gnar in game one, which resulted in a win, he chose Nidalee in game two to go up against Yu “Qingtian” Zi-Han’s K’Sante. Despite the unconventional pick, TheShy always won whenever they traded on their singles inferno top lane island.

Nidalee, however, didn’t translate to a game victory. In the game three decider, he picked K’Sante himself and still somehow, someway, found a 1v1 edge over Qingtian’s Jax. How does this man keep doing it?

TheShy explodes into LPL Spring 2023 with an exciting 1v1 montage

In the early game, both Weibo Gaming and Top Esports were tied in kills and gold.

Even though Gao “Tian” Tian-Liang’s Wukong was at bot, his presence was not detected. However, since Hung “Karsa” Hao-Hsuan was also at bot trying to prevent WBG’s pushing bot lane from getting ganked and outnumbered, TheShy took a chance and went on the aggressive.

QingTian responded with his own aggression, activating his All Out ultimate. However, the third proc of Ntofo Strikes, the empowered active that fires a shockwave in the target direction, did not land.

Weaving in and out of the bush, TheShy narrowly dodged it in cougar form before changing back to human form to heal up while potting.

Creating distance in cougar form, he baited his opponent to walk into him before finishing him off with Nidalee’s burst comprising Takedown (Q) and Swipe (E).

Unfortunately, Weibo Gaming’s team composition was extremely light on crowd control, so they could not gain ground in all-out 5v5 fights at objectives, and eventually lost game two.

In game three, TheShy went back to tanking duties. Combined with Elise, Viktor, and Lux, WBG were better equipped to find picks.

Top Esports paid him more attention this time, ganking top side, putting TheShy down two deaths with zero kills. After mid-game rotations, he and QingTian were clearing minions at bot. The moment QingTian jumped onto him, he used Path Maker (W) and All Out (R) to push his opponent a distance back into turret range.

Since he was playing a tank champion building tank items, those turret shots were crucial in this trade. Chasing Jax down with Footwork (E), and pounding him with Ntofo Strikes (Q), both champions were brought down to a sliver of health.

In the last second, TheShy used one last empowered Q to pull Jax towards him, disabling him for a fraction of a second, which was enough to deal the final blow.

In the end, Weibo Gaming’s late-game scaling comp comprising Viktor and Caitlyn managed to out-damage Top Esports, who could not find their footing in team fights. In 31 minutes, they closed out the series 2-1 with a 14,700 gold lead, starting off the LPL Spring 2023 season strong.

Catch all LPL games live on their official Twitch channel.