LEC is no longer the LoL European Championship, introduces new format for 2023

A new chapter in LoL Esports. With a new and wider esports ecosystem, Riot Games is also implementing major competitive format changes. There will now be three splits instead of two, and a new LEC Season Finals, jam packed with best-of-threes and more best-of-fives matches.

“We’re focused on offering our players the best competition possible,” said the Director for League of Legends Esports in EMEA, Maximilian Peter Schmidt.

“These changes will further enhance the opportunities for professional and aspiring LoL players in the region, giving them more avenues to reach the elite level of competition in EMEA.”

The merge comes with a fresh format ahead of the 2023 season, featuring shorter, more dynamic splits with best-of-threes and more best-of-fives in the LEC.

LoL EMEA Championship will introduce three splits that will each run for six weeks and will culminate with the Season Finals.

These splits are divided into three stages: regular season, group stage, and playoffs.

The regular season will pit all 10 participating teams in a single round-robin format played in best-of-ones.

Only eight teams will advance to the group stage, where the format will shift to double-elimination, with matches played in best-of-threes.

The competition will only get tougher in the playoffs. The remaining four teams will play best-of-fives, where the winning team will be hailed as the split champions.

The champions of Winter, Spring, and Summer will automatically secure a spot in the Season Finals, with the remaining places and overall seeding decided by championship points. 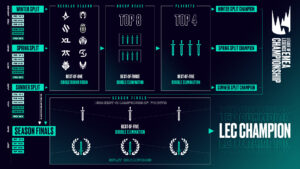 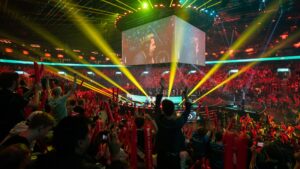 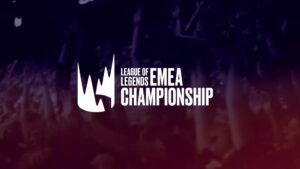 All participating teams in LEC 2023

This new format is being rolled out in EMEA as a pilot program since LoL Esports is considering “broader changes to the competitive calendar and season structure in 2024 and beyond” according to the LoL EMEA website.

Learn more about the LCK’s new playoffs format, MrBeast’s upcoming LCS team, and the state of League of Legends player base in Southeast Asia.