KDF Teddy: ‘She can be dealt with, there’s no need to ban Zeri on red side’

She holds a whopping 106 bans in the LCK. 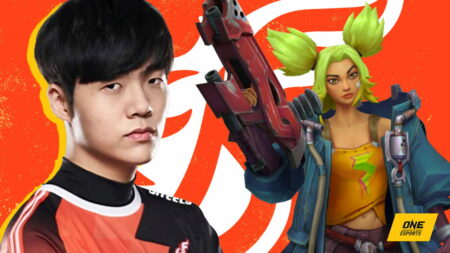 One of the stars to join the org during the offseason is Park “Teddy” Jin-seong from T1. Seeking pastures anew, the 24-year-old experienced a turbulent 2021 season where he shared playtime with fellow bot laner Lee “Gumayusi” Min-hyeong.

Speaking exclusively to ONE Esports, KDF Teddy shared his thoughts about Zeri, how the bot lane meta has changed in 2022, and champions he thinks would be fun to see in the LCK.

One of League’s newest champions, Zeri, has risen to the top of the LCK bot lane meta because of her high mobility and damage output.

Unlike other marksman champions like Jinx that lack a gap closer, Zeri can escape from dives with Spark Surge (E), which allows her to vault over walls and clean up low HP stragglers.

“Zeri’s strength is that when she can scale, she carries hard,” KDF Teddy told ONE Esports. “She can melt the front line fast and then clean up the back line afterwards.”

In the LCK alone, she holds a 62.1% win rate after 29 games, the highest among all bot laners in the current meta. Additionally, teams have banned her a whopping 106 times, third behind Caitlyn at 159, and Twisted Fate at 176, based on data from Games of Legends. A bulk of these bans were by teams playing on red side, for blue teams will most definitely first pick her if not banned.

However, KDF Teddy doesn’t think she’s a must-ban for teams on red side. “Of course, each team will have different thoughts. There is no need to ban Zeri because she can be dealt with by focusing on her in-game,” he explained.

Having picked her in four LCK games, winning three of them, he certainly thinks Zeri is a good pick, especially in the late game.

“At first, there was an evaluation that she is weak in the laning phase, but unless she’s laning against Caitlyn, I don’t think she’ll be pushed under turret,” he said. “If Zeri’s teammates don’t leave her unattended, it’s doable enough.”

Teleport rework lets bot laners push up to the turret

Prior to Season 12, bot laners were not able to freely push up to turrets, for solo laners would frequently teleport on strategically placed wards behind them. As a result, teams preferred to draft safer, high mobility champions like Ezreal to minimize the risk of them dying in the laning phase.

After the new changes to Teleport on patch 12.1, lane-dominant bot laners have risen in priority. Since solo laners are no longer able to teleport bot pre-14 minutes, teams have been prioritizing champions with long range who can push up and siege early, such as Jinx and Caitlyn, and KDF is no exception.

“I’ve played Aphelios, Jinx, and Caitlyn so much that it would be fun to see Kai’Sa, Xayah, Ezreal, and so on,” he said.

Incidentally, Kai’Sa is becoming more popular as a flex option after Lee “Faker” Sang-hyeok surprised by picking her mid.

So maybe Teddy will get his wish sooner rather than later, as a Xayah, Kalista, and Ezreal enthusiast.

READ MORE: The most picked champions in LCS, LEC, LCK, and LPL are surprisingly different