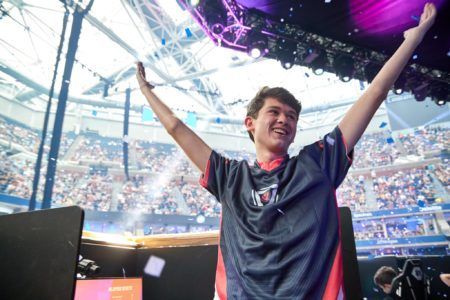 Beating out 99 of the best Fortnite players in the world, most of whom were much older than him, 16-year-old Kyle “Bugha” Giersdorf dominated the Fortnite World Cup Solo Finals and took home a whopping US$3 million in prize money.

Bugha made his mark early in the competition, notching nine eliminations and the Victory Royale in game one to top the leaderboard with 19 points. Bugha held onto his lead through the remaining five games, finishing with a score of 59 points, 26 points more than second-place finisher Psalm.

Ninja made the announcement in a tweet and a comedic sketch on his YouTube channel, calling the move “The Next Chapter”.

Although Twitch was essential for Ninja’s rise to fame, Mixer poaching Ninja away appears to be the perfect chess move for the Microsoft-owned streaming platform.

Season 10 of Fortnite: Battle Royale is here, and brings with it huge changes in the form of Rift Zones and a powerful, new two-person vehicle called the B.R.U.T.E.

Rift Zones were created by the massive Singularity explosion that occurred at the start of Season 10. Each zone is a window into the past, bringing back locations from previous seasons, like the famous Dusty Depot just before it was destroyed by the meteor in Season 3.

The B.R.U.T.E. is a new two-man vehicle, with one player in charge of driving, while the other fires its extensive array of weaponry, which includes a shotgun and a missile launcher that can fire up to 10 missiles at the same time. If only one player is present they’ll have to swap between driving and shooting.

The three new DLC characters — together with a new stage called Honda Sento, which is a remake of Honda’s classic Street Fighter II stage — are available to play now.