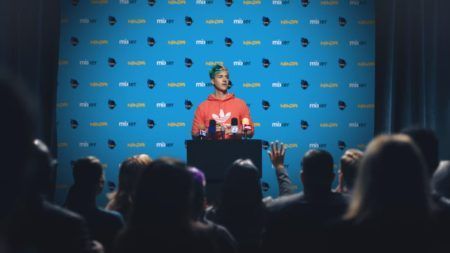 Tyler “Ninja” Blevins has made the bold move of leaving streaming platform Twitch to broadcast exclusively on Microsoft’s Mixer.

Ninja made the announcement in a tweet and a comedic sketch on his YouTube channel, calling the move “The Next Chapter”.

Although Twitch was essential for Ninja’s rise to fame, Mixer poaching Ninja away appears to be chess move for the Microsoft-owned streaming platform.

Without a doubt, Ninja’s partnership with Mixer will create a ripple effect in the streaming world. Not only will Ninja’s exclusivity attract millions of his fans to the platform, but it could also prompt many famous and rising streamers to join him for a fresh streaming experience, as well as the thought of a likely fat paycheck from Microsoft.

In the video, Ninja announced his departure from Twitch and happily joining Mixer. Reporters in the crowd, who are just disguised versions of Ninja, start asking silly questions. Ninja, though replies that its all about getting back to the roots of why he “fell in love with streaming”.

“I’m freaking out in the best ways,” said Ninja.

Twitch also had a few kind words to say about the streamer and his trailblazing career on their platform.

“We’ve loved watching Ninja on Twitch over the years and are proud of all that he’s accomplished for himself and his family, and the gaming community,” Twitch said in a statement to the Verge. “We wish him the best of luck in his future endeavors.”