Season 10 will let you hop into a powerful mech and battle in a Fortnite map caught between past and present. 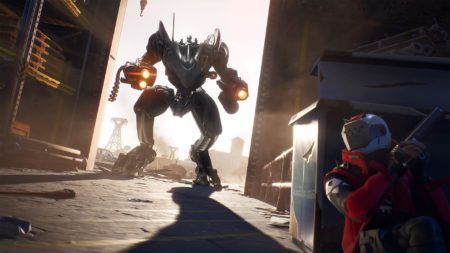 Season 10 of Fortnite: Battle Royale is here, and it brings huge changes in the map in the form of Rift Zones and a powerful, new two-person vehicle called the B.R.U.T.E.

The explosion of the Singularity or “Zero Point” in the season’s story trailer has apparently caused the appearance of Rift Zones throughout the many points of interest in the map.

These zones bring back locations seen from Fortnite’s previous seasons but with some interesting twists, the foremost being the return of the beloved Dusty Depot just as it was about to be destroyed by the meteor from Season 3.

Aside from the appearance of the Rift Zones, one of the other highlights of Season 10 is the addition of the B.R.U.T.E. This powerful two-person vehicle was first seen during the second teaser for the new season.

Two players can share control of the B.R.U.T.E., with one in charge of driving it while the other wields its array of weaponry. If there is only one player controlling it however, they will have to switch between driving it and firing its weapons.

Aside from controlling the movement of the B.R.U.T.E., the driver can stomp on enemies and structures, as well as perform dashes or super jumps. While inside the mech, destroying objects and structures will grant the player materials. This can then be used in the vehicle’s Overshield mechanic, which consumes 200 of any material type to create a personal overshield for five seconds to protect the mech.

While the B.R.U.T.E. by itself is already formidable, its weaponry makes it even more dangerous. It wields a ten-clip shotgun that deals 50 damage a pop and a missile launcher that can fire up to 10 missiles at once.

Taking down a B.R.U.T.E. is not an easy task, and players most probably would have to work together or find a B.R.U.T.E. of their own to take it down.

While Season 10 adds new toys for players to get their hands on, a handful of others are also being vaulted, namely; the Baller, Quad Crasher, Flint Knock Pistol, Shadow Bomb, Semi-Auto Sniper, Tactical Assault Rifle, Mounted Turret, Air Strike, and the Itemized Glider Redeploy.

For the full list of updates for Season 10, check out the patch notes here.