Buckle in for more action on the road! 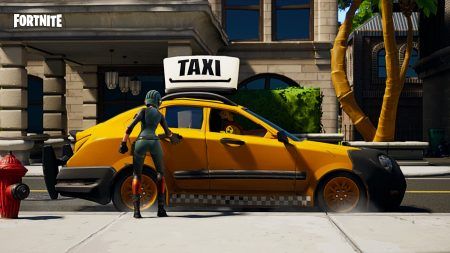 Fortnite and Marvel Comics’ massive crossover may be getting all the buzz as the hit battle royale game enters Season 4 this month, but that’s not all that Epic Games has in store for the Fortnite faithful.

In this game mode, players spawn in a taxi and must race to collect a designated number of driver ratings stars against an opposing team (duo). Driver ratings are based on a variety of factors, including distance traveled and completing passengers’ special requests — such as getting to the destination unharmed, ramming other taxi cabs, going off-road, or even sending the car airborne.

While playing Tilted Taxis, players can still hop out of the car and engage in some good old combat on foot. Shoot down an enemy and you can claim stars they leave behind to add to your own score. After you’re done, you can hop right back in any cab you find on the map.

Battle royale elements aside, the gameplay of the Tilted Taxis LTM is reminiscent of arcade classic Crazy Taxi. For long-time Fortnite fans, however, what might be even more curious is how similar the title “Tilted Taxis” is to a classic Fortnite map location.

Tilted Towers was once one of the busiest areas on the Fortnite island, until it was destroyed in an unprecedented volcanic eruption in Season 8. Only time will tell if Epic has yet another surprise planned with this deliberate title choice.