There are also adjustments to the Baller, Drum Gun, and the newly-introduced Slipstreams. 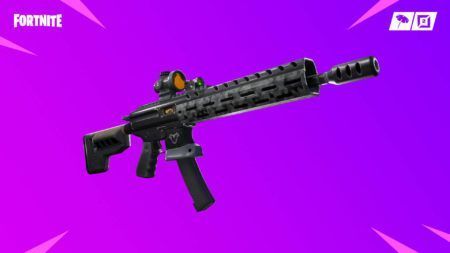 The first content update for Fortnite Season 9 is here.

Headlining the update is the new Tactical Assault Rifle, a robust and precise weapon that is ideal for close-quarters combat. It is fully automatic with a 30-round magazine, and deals 22-24 damage per shot, with a Headshot Multiplier of 1.75x.

While the tight spread of the Tactical Assault Rifle makes it very effective in close quarters, it is less effective at long range compared to other Assault Rifles. You’ll want to get up close and personal with your opponents to fully utilize this weapon, which makes it pair well with the Shadow Bomb from the v8.51 update for lethal sneak attacks.

Another interesting tidbit about the Tactical Assault Rifle is that seems to be part of an upcoming datamined game mode involving John Wick, whose mansion was added to the map in Season 9.

The update also made minor adjustments to the Baller, which continues to be notoriously overpowered. The infamous vehicle had its health cut down from 200 to 150, which should make it a little easier to deal with.

Fortnite developer, Epic Games, explained that the Baller had a “little too much defensive agency,” and that the change should reduce its effectiveness in that aspect while not impacting its overall strengths.

The Drum Gun, which was brought back to the game in the ‘Unvaulting’ event prior to the arrival of Season 9, was also nerfed, with its base damage reduced from 26/27 to 22/23. Epic explained that the weapon was much more powerful than intended, and that the adjustment “should reduce its combat effectiveness while still retaining its flavor.”

The v9.01 update also made some adjustments to Slipstreams, the new wind transportation system introduced in Season 9, and how they interact with player buildings. Previously, some players who had built up to reach the Slipstream found that they were unable to use it. Slipstreams will now no longer block building, and players should be able to build up to them and use them. In a related change, players who are flying in a Slipstream will destroy any player-built objects they collide with — likely to avoid funky and potentially game-ruining interactions.

Slipstreams will now also be disabled after storm phase 5 — a fix to an issue that affected some players being pulled into the storm in late game situations.

Lastly, due to the recent additions of the Drum Gun and the Tactical Assault Rifle, the Compact SMG has been vaulted so that high rate-of-fire weapons won’t be too abundant in the game.

For the full list of changes coming with Fortnite v9.01, check out the patch notes.