The Drum Gun returns in Fortnite’s ‘The Unvaulting’ event 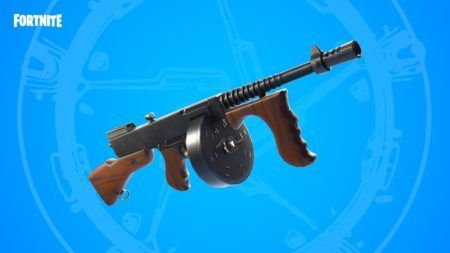 Fortnite’s new-old gun is getting players pounding with excitement.

Fortnite’s latest The Unvaulting event took place yesterday when the vault on Loot Lake opened its doors to players, emitting a mysterious light that seemed to invite everyone to enter. This signaled the start of the Rune Loot Lake Unvaulting event.

Inside, the vault featured removed or vaulted items from the different seasons of Fortnite. Players could see six items encased in blocks of ice: the Tactical Submachine Gun (released on Season 1), the Drum Gun (Season 4), Bounce Pads (Season 4), the Grappler (Season 5), the Infinity Blade (Season 7), and the X-4 Stormwing Plane (Season 7).

A majority of the players voted to unvault the Drum Gun, through a collaborative effort to destroy its ice container during the live event.

The Drum Gun, first released on Fortnite Season 4, is a hybrid weapon which has the characteristics of a rifle and submachine gun combined. It comes in Uncommon and Rare variants and has a 50-round capacity. However, by the end of Season 5 late last year, the Drum Gun has been vaulted to make room for other weapons.

After the unvaulting process, all players were transported into the map just in time to see the volcano erupt. The explosion of hot rocks had debris flying specifically toward Tilted Towers and Retail Row, destroying both locations on the map. Polar Peak was also included in the volcanic rock catastrophe, however no map changes have been reported.

Top Fortnite streamer Richard “Ninja” Blevins, gave the Unvaulting event a rating of 10 out of 10.

Unfortunately, some players were not able to participate in the Unvaulting event due to client issues. Fortnite is giving out Arcana Gliders to “anyone who jumped into the Unvaulting playlist” as compensation. Those who already own the Arcana Glider will instead get V-Bucks. The developer of the game is also working on a solution to replay the event for those who had missed it.

SEE ALSO: The Reboot Van returns to Arena and tournaments