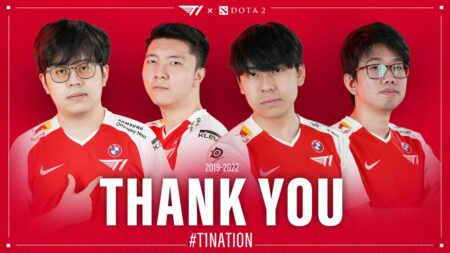 T1 is officially letting go of its Dota 2 roster after a host of departures over the past month.

The South Korean esports organization announced the news today, thanking its players for their time with T1.

Coach Park “March” Tae-won parted ways with the team three weeks ago, while Carlo “Kuku” Palad and Kenny “Xepher” Deo have been looking for opportunities as free agents.

This means that former OG stars, Topias “Topson” Taavitsainen and Anathan “ana” Pham, will also be free agents. Topson has been vocal about returning to Europe to continue his playing career, while it wouldn’t be surprising to see ana return back to retirement.

Who is T1’s Dota Pro Circuit slot going to?

Following T1’s official announcement today, it seems possible that the organization is pulling entirely out of the esport.

While no concrete announcement have been made, the team’s social media graphic included “2019-2022”, perhaps indicating the final toll for the SEA team.

Singaporean organization Bleed Esports is looking to take over T1’s vacant slot, according to ONE Esport’s sources. The org only fields a roster for one game, Valorant, at the time of writing.