Saudi Arabian prince has spent US$40,000 on Battle Pass levels

Can you guess how long his Ceb voice line is? 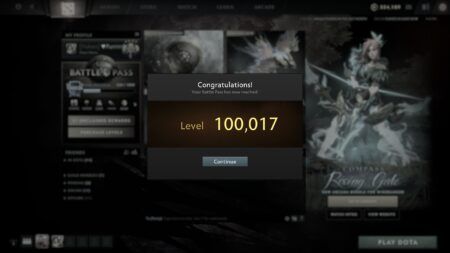 How much did you spend on this year’s Dota 2 The International 10 (TI10) Battle Pass? One player went overboard and splurged by purchasing hundreds of thousands of levels.

Saudi Arabian prince, Mohammed bin Salman bin Abdulaziz al-Saud, has spent a whopping US$40,000 on TI10 BP levels, the highest that anyone has reached this year in terms of spending and levels.

Abdulaziz al-Saud has reached BP level 107,584 on the TI10 Battle Pass and has made an approximate contribution of US$11,000 towards the The International 10′ prize pool.

It’s possible that he had a jumpstart and purchased the Battle Pass Level 100 Bundle, and then later on bought multiple levels. The highest amount of levels on a bundle that a player can buy are 24 levels at US$10. All Battle Pass sales will have 25% deducted as proceeds that go directly into the TI10 prize pool.

His most played hero is Crystal Maiden, with about 1,500 matches played at a 52.46% win rate according to his Dota Buff profile. The prince is ranked Legend IV and has recorded a total of over 11,000 matches played in his account.

Abdulaziz al-Saud, together with hundreds of thousands of Dota 2 players, have made many contributions to the The International 10 prize pool. TI10 now has the biggest esports prize pool of all time, and is about to hit US$40 million with the power of crowdfunding through the Battle Pass earnings.