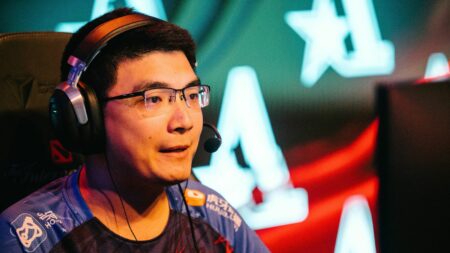 Zeng “Ori” Jiaoyang is officially hanging up his mouse and keyboard after a fourth-place run with Team Aster at The International 11.

The 27-year-old’s retirement was announced last night by the Chinese organization.

Aster said that it was respecting the player’s personal decision to retire, as translated by ONE Esports, thanking Ori for bringing his years of experience and exciting performances to the team.

Various iterations of the Team Aster roster have excelled domestically, but failed to find success internationally until Ori’s joining. The former Vici Gaming midlaner brought championship pedigree to Aster, helping the organization claim its highest-ever Major and TI placings this year. The team finished third at the PGL Arlington Major, and fourth at TI11.

Ori called time on his six-year career, where his most illustrious performances have come with Vici. Along with Zhang “Paparazi灬” Chengjun, the two helped establish Vici as one of the scene’s most consistent and winning teams, winning two Majors.

Aster will now need to find a new midlaner for the upcoming DPC season.

Aside from Ori and support player 皮球, the team has remained nearly unchanged for almost two years.

While the organization has shown a strong preference for players within the region, the team once employed Malaysian Ng “ChYuan” Kee Chyuan as its midlaner from 2019 to 2020.

READ MORE: Thunder Awaken set records at TI11 — but will have a new roster next season