ChYuan stole our hearts along with that Aegis. 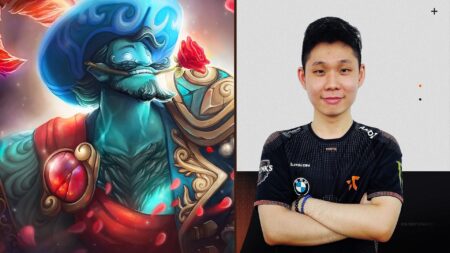 Ng “ChYuan” Kee Chyuan who plays as the midlaner for Fnatic pulled off one of the best Aegis steals of all time on Day 4 of The International 10 (TI10). Fnatic was leading the game but it was the incredible Aegis steal that sealed their victory.

The International is Dota 2’s biggest tournament of the year. It pits 18 teams from around the world that qualified through the DPC or the Regional Qualifiers. Teams compete for their slice of the US$40 million prize pool.

Dota 2 has an incredibly powerful neutral creep called Roshan. Killing Roshan is the only way for teams to get an Aegis of the Immortal. Aegis provides the holder with a second life if they die while holding it.

Team Secret was behind in game one of their group stage match against Fnatic. To get back into the game Team Secret tried to sneak a fast Roshan to have an advantage in the next fight.

ChYuan predicted this and managed to steal the Aegis using Storm Spirit. Storm Spirit’s ultimate Ball Lightning allows him to zip around the map quickly as a fast invulnerable ball of lightning. While using his ultimate, Storm can still use items and pick up items, as ChYuan demonstrated in his perfect steal.

The Aegis steal prevented Team Secret from getting a foothold in the game and solidified Fnatic’s victory over one of the tournament favorites.

In an interesting twist of fate, during the exact time that Fnatic was playing against Team Secret, SG Esports was battling Quincy Crew and both games featured a Storm Spirit.

4dr attempted the same trick that ChYuan performed, but the results were decidedly more mixed.

Due to the unsuccessful attempt, Yawar “YawaR” Hassan was able to take the Aegis for himself and Quincy Crew won the game 17 minutes after that.

Liked this play? For more incredible Dota 2 action, check out the Heroes of the Game documentary presented by foodpanda.