VP and Aster both scored one-sided wins to end their group stage matchup with a draw. 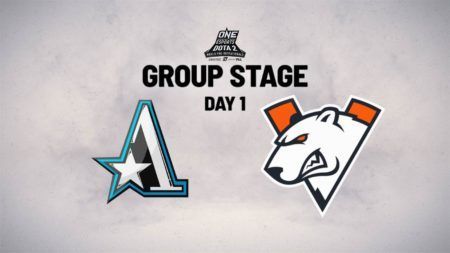 The action in Group A of the ONE Esports Dota 2 Singapore World Pro Invitational continued on Day 1 with a match between Chinese team Aster and CIS squad Virtus.pro, which ended in a 1-1 draw.

Both teams needed wins, as they both started the day with 0-2 losses, with VP being swept by Team Secret and Aster falling to Alliance.

VP opened game one with a heavy lategame composition, with Egor “epileptick1d” Grigorenko on Medusa and Vladimir “no[o]ne” Minenko on Dragon Knight. Aster countered with an unusual Position 1 Magnus for Song “Sccc” Chun, a mid-Sniper for Kee Chyuan “ChYuan” Ng, and Brewmaster for Lin “Xxs” Jing.

An uneventful laning phase ended in VP’s favor, as their two cores were able to get good farm while Chyuan’s Sniper was heavily shut down. With their primary damage-dealer having minimal impact on the game, Sccc and Xxs were forced to pick up the slack in the ensuing teamfights.

Despite Aster’s best efforts, the Position 1 Magnus could do little against a farmed Dragon Knight and Medusa pairing — even with Xxs transitioning into a tertiary core and Chyuan finally able to catch up.

The VP deathball was eventually able to reach critical mass however, running over Aster’s defenses to take game one after just over 50 minutes.

Aster looked to bounce back by putting Sccc on a more traditional carry in Troll Warlord, with ChYuan on Dragon Knight. VP opted with epileptick1d on Tiny and no[o]ne on Shadow Fiend.

Game two started off slow as both teams were once again content to just farm up, with VP coming out on top and using that advantage to go on the offensive. Aster was able to wrest control of the game away from VP in a drawn-out clash for the Aegis, which they used to take over the map and shut their opponents in their base. Key pickoffs on multiple VP heroes eventually opened up an opportunity for Aster to draw the series, 1-1.