J.Storm blindsided TNC in game one, but the Chengdu Major champions recovered in game two. 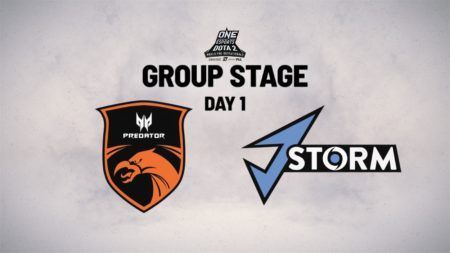 Group A of the ONE Esports Dota 2 Singapore World Pro Invitational Group Stage opened with a match between TNC Predator and J.Storm, with the best-of-two series ending in a 1-1 draw.

TNC opened game one with a Tiny-Wisp combo for Kim “Gabbi” Villafuerte and Park “March” Tae-won, with Armel Paul “Armel” Tabios on Viper as a secondary core. Meanwhile, J.Storm opted for a strong midgame push lineup with Lone Druid for David “Moo” Hull and Shadow Fiend for Leon “Nine” Kirilin.

TNC started the laning phase well enough by shutting down Nine’s Shadow Fiend, but J.Storm were still able to get themselves into a groove with multiple key kills.

While the midgame was where TNC’s Tiny-Wisp combo was supposed to shine, J.Storm was able to hold them back and go on the offensive themselves. With momentum on their side, J.Storm forced TNC into taking bad fights that opened up their base and prompted the GG call.

TNC looked to bounce back in game two with Gabbi on Terrorblade winning the game for them late, with Armel on a mid Puck and Damien “kpii” Chok on Omniknight to help get him there.

J.Storm had no problem deciding the game late though, as they opted for a core duo of Sven for Moo and a mid-Zeus for Nine.

TNC dominated the game from the get-go, with Armel and Gabbi winning their respective lanes hard and putting a lot of pressure on Moo to bring J.Storm back into it.

He never had that chance, however, as Armel had free rein to wreak havoc across the map while Gabbi farmed up to eventually secure an easy game two for TNC, securing the 1-1 draw.