Gambit ended Day 1 undefeated and at the top of Group B. 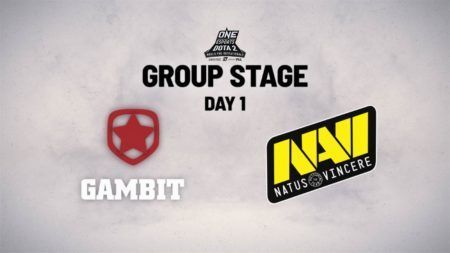 The last set of matches for Day 1 saw Gambit Esports take on Natus Vincere, in a match of two CIS teams.

In the end, Gambit Esports took the 2-0 victory over the more veteran Na’Vi squad, securing the top spot in Group B in the progress.

For game one, Gambit decided to draft a Position 5 Viper and a Terror Blade for Kiyalbek “dream`” Tayirov. Na’Vi chose to go with a Magnus on the middle lane for Idan “MagicaL” Vardanian, and a Blood Seeker for Vladislav “Crystallize” Krystanek.

Gambit had a slight advantage against their opponents during the laning phase. But Na’Vi evened the odds by rotating their heroes, which caught the Dire team off guard.

In the mid-game, Na’Vi lost a team fight to Gambit because they failed to synergize their Reverse Polarity and Static Storm ultimates.

But Na’Vi was able to gain back map control by team wiping Gambit right outside the Roshan Pit. Ilyas “ilias” Ganeev was able to isolate the enemy Puck and the rest of his teammates took down Gambit’s heroes.

Thinking they could increase their lead, Na’Vi pressured the Dire’s middle lane tier two Tower, but Gambit’s dream` on the Terror Blade ended up shredding the Radiant heroes.

A few moments later, Gambit caught Na’Vi again with a perfectly placed Ice Shards from Danial “XSvamp1Re” Alibaev that trapped their CIS rivals, giving them enough of an advantage to close out the first game.

In game two, Na’Vi went with a Slark hard carry and a middle lane Invoker for MagicaL. Meanwhile, Gambit went with a range hero draft with Storm Spirit and Drow Ranger.

Similar to the first game, Gambit took control of the laning stage thanks to their tri-lane in the top lane with Drow Ranger, Vengeful Spirit, and Earthshaker who kept blocking Na’Vi’s escape path.

Danil “gpk” Skutin set the pace of the game with his Storm Spirit by taking down key Radiant targets.

Na’Vi took control of the match for a brief period of time because of their Abbysal Blade and Scythe of Vyse reveals. They punished an overeager gpk, who bought back after being picked off only to die again.

Na’Vi continued trying to hunt down gpk’s Storm Spirit, but this gave dream` on the Drow Ranger all the space he needed to deal an insane amount of damage towards the enemy team. With Na’Vi lacking buybacks, Gambit ended game two right outside the Radiant base.

Gambit ended their amazing Day 1 Group Stage run by going undefeated 4-0 and at the top of Group B. Na’Vi finished their Day 1 run in Group B by going 2-2 and currently sit in joint 3rd place alongside Vici Gaming.