The best series of Day 1 saw the leaders of Group A clash in a hard-fought two-game set. 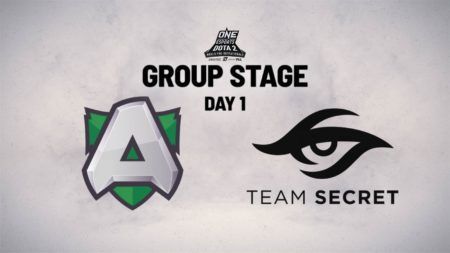 In a clash between the two top teams of Group A, Alliance bounced back from a game one drubbing at the hands of Team Secret to force a draw in the hard-fought series.

Secret held the lead after the laning phase and never looked back, with Nisha’s Storm Spirit leading Secret in quickly asserting their dominance over the map.

Alliance tried to eke out as much farm for their cores as they could to give themselves more of a fighting chance, but they were continually being run over in fights. With things looking bleak for Alliance, Secret marched into their base and secured a quick 22-minute victory in game one.

Secret went with a strong core duo of Drow Ranger for Matumbaman and Outworld Devourer for Nisha in game two, with Alliance countering by putting Nikobaby on Morphling, Limmp on a mid Silencer, and Neta “33” Shapira on an offlane Magnus.

Alliance had a much better start this time compared to game one, holding a 3k gold and 11-2 kill lead by the 12-minute mark. It didn’t take long for Alliance to come online and start threatening Secret’s base, but the latter was able to hold on long enough for their cores to start having an impact.

Despite an incredible display of individual skill from Nisha in a crucial fight for Roshan, Alliance ended up taking the Aegis which they used to open Secret’s base up to assault and further their lead.

Secret tried their best to claw their way back into the game, but they were simply too far behind to repel Alliance’s onslaught and were forced to call GG after 56 minutes.

Both Alliance and Secret finish day one of the Group Stage with a 5-1 record — well ahead of the other teams in their group — which guarantees that they will be starting the Main Event from the Upper Bracket.