After a shaky start, Virtus.pro recover in their last game of Day 1, picking up two crucial points to keep their tournament hopes alive. 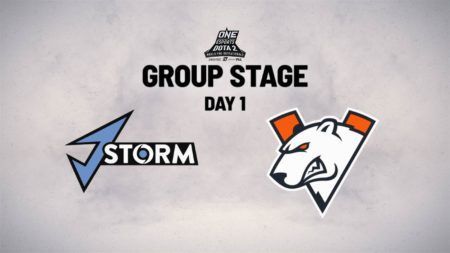 After a shaky start to the day, losing to Team Secret, and tying with Team Aster, CIS hopefuls Virtus.pro bounced back against American squad, J.Storm, winning 2-0.

The early moments of the first game saw Virtus.pro take a quick lead as J.Storm made mistakes. Early in the game, a crucial clash saw David “Moo” Hull’s Tiny, Clinton “Fear” Loomis’ Io, and Leon “Nine” Kirilin’s Doom all go down in the bottom lane.

The game was not entirely one-sided, however, as J.Storm won a few team fights and gain gold for themselves.

By the 24-minute mark, Virtus.pro managed to get revenge by killing the entire Dire side in a fight near the Roshan pit.

With no one left to defend the lanes, Virtus.pro pushed for J.Storm’s Ancient. Only a few more hits and the former would have ended the match, but Moo’s Tiny managed to stall out, buying time for the American squad.

J.Storm planned to push for the Radiant Ancient, but stalled when Tiny went down. Virtus.pro immediately counterattacked, and this time managed to seal the deal, picking up the game one win.

The outmaneuver was short-lived, however, as Joel Mori “MoOz” Ozambela’s Tusk took him out with a well-aimed Snowball.

A big fight over Roshan at the 20-minute mark saw VP take down four members of J.Storm, then take the Aegis.

Virtus.pro capitalized on their advantage, and finished the game, taking the game two victory in just 30 minutes.